A “Unified border guard and authority” will be one of the first orders of business when Parliament opens for the third quarter of the year.

On the agenda for the portfolio committee on home affairs is “processing the Border Management Authority Bill — which‚ a statement noted‚ is a modified name as “the authority was called the agency in the former draft of the bill”‚ it said at the weekend.

It was necessitated by “inefficiencies resulting from having many government departments co-ordinating, and often duplicating, the securing of SA’s land‚ sea and air borders,” which “have contributed to the porous 5,244km border”.

“The bill and related authority aim to centralise the border-related responsibilities of‚ amongst others‚ the Department of Home Affairs‚ the South African National Defence Force and Police Service‚ Customs of the South African Revenue Service as well as aspects of the Departments of Agriculture‚ Environment and Health‚” the committee said in the statement.

After briefings‚ public hearings and written submissions‚ it is “likely to be finalised in the last quarter of 2016 or early in 2017”.

Also on the committee’s plate is “reliable higher bandwidth network services” needed by the Department of Home Affairs “to facilitate the expanded roll-out of technology-driven service delivery improvements”.

“These include paperless applications for more secure smart identification cards and passports as well as online visa and permits processes. The Department of Home Affairs has experienced challenges with the network services provided by the State Information Technology Agency and is in the process of seeking alternatives.” Source: Buisness Day Live

Rampant cigarette smuggling isn’t the problem in New York–“sky-high” tobacco taxes are, according to an op-ed by Patrick M. Gleason, director of state affairs at Americans for Tax Reform, in The Wall Street Journal.

Gleason’s opinion piece, titled “A Laffer Curve for Smokes,” digested here, takes the city and state of New York to task for their $180-million lawsuit against UPS over what officials allege was unlawful delivery of nearly 700,000 cartons of cigarettes. (A Laffer curve, named for economist Arthur Laffer, shows the relationship between rates of taxation and levels of government revenue.)

“This misguided lawsuit demonstrates once again that too many in government do not understand the root cause of cigarette smuggling. New York state levies the highest cigarette tax in the nation, $4.35 per pack, and New York City tacks on an additional $1.50 local tax. All told, the cost of one pack there can run to $12 or more.

“The result? Most of the cigarettes smoked in New York, 58%, are smuggled in from out of state, according to the nonpartisan Tax Foundation. The higher that revenue-hungry politicians raise tobacco taxes, the more profit smugglers can make.

“Politicians never learn. Of the 32 state tobacco tax increases that went into effect between 2009 and 2013, only three met or exceeded revenue projections, according to industry data.

“Lawmakers can claim they’re raising taxes on cigarettes to reduce smoking and improve public health. That talking point is belied by the recent imposition of taxes on electronic cigarettes, which are saving lives by delivering nicotine in puffs of water vapor instead of chemical-filled smoke. There are more than 15 tax bills pending across the country for currently untaxed e-cigarettes. Hawaii is proposing a tax of 80%, New York of 75%, Oregon of 65% and Ohio of 60%.

“New York state officials claim that the cigarette smuggling via UPS cost the treasury $29.7 million in lost tax revenue. That’s less than 0.03% of the state budget. The $4.7 million allegedly lost by New York City represents less than 0.006% of its budget.

“For a mere rounding error, state and city officials want to grab $180 million from UPS. That’s $180 million UPS could use to hire new workers, give employees raises, or invest back into its business. The leaders of New York and New York City should drop this silly lawsuit and find a more productive use of their time.”

While not exactly the kind of equipment for a Customs Enforcement operation, I did feel suitably proud to punt a locally developed ‘non-intrusive’ imaging device given its recent international prominence.

In the episode, the doctors and nurses of Grey+Sloane Memorial Hospital’s brand new ER are excited and amazed to have the Lodox Statscan in their trauma department. After a long wait of anxious anticipation, they are suitably impressed by the X-ray scanner’s ability to take an entire body scan in just 13 seconds, and what this will mean for how they treat trauma patients. Far from paid-for product placement, this was a story line independently researched and written by the Grey’s Anatomy producers. Our Lodox NA team made sure they had a real, working Lodox machine on the set of the new ER.

Some of the tech and application notes off the Lodox website:

Due to its unique X-ray system, scanning technology and design, it emits extremely low levels of entry and scattered radiation, making it safer for operators and staff.

For emergency trauma situations, the Xmplar-dr permits easy access to the patient to allow for monitoring and resuscitation to take place around the scanning process. The 13-second, full-body scan provides instant information with which to form a diagnostic image of the patient’s injuries.

In forensic pathology (medico-legal) applications, the Xmplar-dr provides an easy-to-use, fast method for assessing the entire subject’s body in multiple planes to assist with pathology location, particularly useful in the case of gun shot victims. The single sweep eliminates the need to move the subject to obtain all necessary views, making it more efficient and safer for staff.

Lodox is also ideally suited to imaging of bariatric and paediatric patients, and has found applications in many other areas of medical imaging.

The high quality, digital images, ease of use and reliability make the Xmplar-dr an invaluable piece of imaging equipment in any medical trauma or forensic pathology arena.

Euromonitor International’s webinar will aim to answer these questions while setting the global tobacco market in context, reviewing overall performance by region alongside country case studies, related trends in duty-paid volume sales, smoking populations and illicit penetration. Click this link to register for the webinar. Market performance will be reviewed against legislative changes, manufacturer strategies, and trends in product innovation, with a view to what the industry can expect to 2017.  Source: Euromonitor International 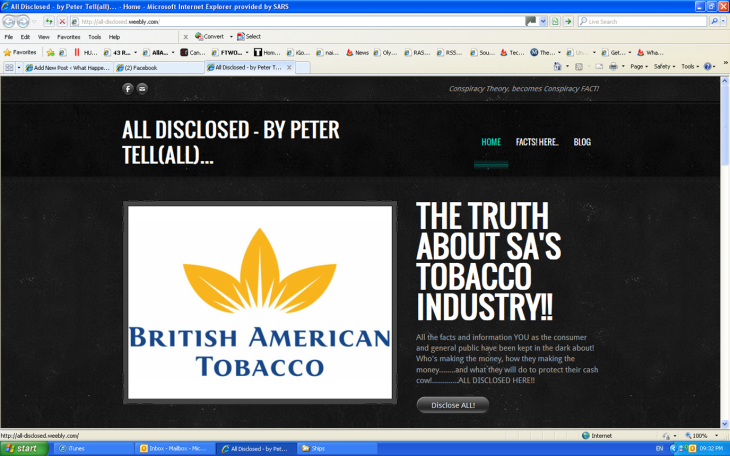 With much international focus on tobacco and tobacco products its great to read something outside of the mainstream media. Evidently this guy has some real insight in the tobacco industry and he sure is passionate about his views. This is a fine example of ‘Social Media’ providing what your average Google search-and-hit will never reveal. Conspiracy theory or not, this is a site dedicated to one thing – exposing the ‘Anglo-American tobacco cabal’. Aptly titled “All Disclosed by Peter Tell(all)” he invites you………

…………… to browse, interact and explore my website dedicated to the exposure of facts, truths and the responsible sharing of the information contained within these pages, about South Africa’s Tobacco Industry! The compilation of articles and also unpublished fact sheets about how this very lucrative and secretive industry operates has up until now been a very dark and well-kept secret! Why would all this information be kept from us? Why would they not want us to know how much money is being made? Why does the Government play both sides of the fence? Who pulls the strings of the authorities? THESE ARE THE QUESTIONS WE SHOULD BE ASKING!!