Delegates from the SADC member states gathered in Port Louis, Mauritius between 9 and 13 October to establish a SADC Customs ICT strategy for the region. The conference, sponsored by the United Nations Economic Commission for Africa, coincided with the 200th anniversary of Customs in Mauritius.

Following recent developments on IT connectivity and data exchange in the region, the conference addressed other areas of ICT in Customs which have a significant influence not only for internal Customs processing but its impact and effect on the broader stakeholder community. The conference was well attended with representatives from Angola, Mozambique, Lesotho, Swaziland, Namibia, Botswana, Tanzania, Zimbabwe, Seychelles, Mauritius, Democratic Republic of Congo, Malawi, and South Africa.

“Customs Connects, Borders Divide” conveyed the central theme for the event with the WCO IT and Capacity Building expert, Mats Wicktor, providing an enabling platform upon which the conference deliberations occurred. A detailed presentation clearly outlined the WCO’s the basis for standards, recommendations and guidelines, with specific reference to the Data Model, the Unique Consignment Reference and the most recent developments on Globally Networked Customs (GNC).

Other keynote addresses were made by Mozambique (DGA) on their experience in implementing the Single Window concept (for more details on this project visit URL: http://tfig.unece.org/case-stories.html).  Host nation Mauritius presented their Cargo Community System, and a number of other IT developments namely, e-Certificate of Origin, valuation database for 2nd hand motor vehicles, and the recently implemented Customs Enforcement Network (CEN) solution. SARS presented its Customs Modernisation journey highlighting some of the key ICT products and features and the respective efficiencies and trade facilitation benefits introduced for trade. Furthermore, it elaborated on its current bilateral data exchange initiatives with Swaziland, Zimbabwe, Mozambique as well as the IBSA countries.

The business end of the conference saw the finalisation, tabling and vetting of a draft SADC Customs ICT strategy. The strategy provides a broad framework, focussed around the concept of Customs-to-Customs data exchange. It seeks to create synergy between member states in regard to aspects such as transit management, common risk and enforcement principles, the entrenching of the One Stop Border Post concept, as well as automation of certificates of origin. From a SADC point of view, the strategy will support the realisation of its Strategic Plan – envisaged to include a Customs Union.

After much controversy centering on allegations of corruption and impropriety, the Federal Government terminated the contract awarded to Single Window Systems and Technology Limited. The contract which allowed for a sole submission point for importers and exporters to lodge their documentation was unilaterally awarded by the Federal Ministry of Finance, under the Umaru Yar Adua administration, on behalf of the Nigeria Customs Service to the company registered in June 2010 with N 1m share capital.

The contract was reported to be worth N 4.5 trillion. The decision to discontinue the contract was based on an investigation by the Ministry of Finance which looked into the processes and the terms of the contract. The investigation which was approved by the President revealed that the contract breached the provisions of both the Procurement Act and the ICRC Act. Nigerian Customs received a letter of notification from the supervisory of the ministry of finance that a concession agreement had been entered between the Federal government and the Single Window System Technologies Limited, so where did the customs come into play before the contract was signed?”

Nigeria Customs Service had earlier said on the controversy, “How can a company enter such an agreement without the knowledge of the Nigeria Customs Service?” The Customs was not involved in the execution of the agreement entered by the Federal Ministry of Finance through the Former Honourable Minister of Finance; Olusegun Aganga. Therefore Nigerian Customs was not carried along by the company called Single Window System Technologies Limited. The tender was scuppered.

Recently, the Nigerian Customs Service convened a Single Window National Stakeholder Conference under the slogan – “Collaboration -Towards a Facilitated Trade Environment”. The conference and workshop took place between 23 and 26 April 2012, and was attended by several local and international delegates representing UNECE, UN/CEFACT, and donor companies German Development Company (GIZ), USAID and Crown Agents. Details concerning the launch of this event can be accessed via the following links – Conference Website and Conference Summary Report.

Comment: So what started on shaky ground has finally materialised into a fully-fledged Customs-led programme – the way it should be, and hopefully remain. Moreover, trade representatives and intermediaries will need to be an integral part of this development for it to attain success. 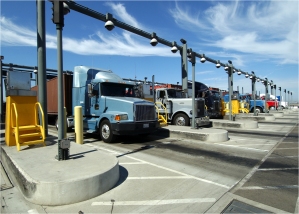 Since the mid-1980’s the concept of port community systems have abounded in various guises. Portnet (now Transnet Port Terminals / National Ports Authority) initiated a drive around this time as well, however the maturity of B-2-B e-commerce, at the time, was in its infancy and there were simply not enough ‘takers’ due to the unknowns such as ‘cost’ and ‘what’s in it for me’. Similarly, the air cargo community – in Europe especially – operated what was called ‘cargo community systems’ (CCS), most of which were operated by a value added network operator who provided the infrastructure and together with an ‘industry/community’ project team developed all the necessary transaction interchanges to facilitate data exchange between participating trade and logistics entities. Some of these CCS’s interfaced with Customs, but mainly serviced the forwarding and cartage community. Towards the end of 1998, South Africa established its very own known as ZA-CCS. Like Portnet’s endeavour, it was perhaps ahead of its time with very few participants to support the anchor sponsor, being the South African Airways. Two years later SARS implemented its EDI programme, and so developed a new era in information exchange for the customs clearing fraternity. The number of service providers also increased to support a burgeoning need for ICT capability. Mainframe systems gave way to thin client and PC-based solutions making it all the more affordable and accessible to the greater trading community.

In the US, Los Angeles has spent considerably more installing security cameras than ports have spent in other countries on setting up a Port Community System. However these have yet to prove their worth in the lucrative US market. Much like the voyages of discovery to the New World 500 years ago, Port Community Systems are taking their time to spread beyond Asia and Europe. In the US, they are virtually unknown outside their uses in security and safety.

European ports have undoubtedly benefitted from PCS in varying forms. An outstanding system is Portbase, linking Rotterdam and Amsterdam in virtually every activity. So far, 40 different services are offered, with Notification of Dangerous Goods next in line. The big test in extending Portbase lies in fitting the programme into less homogenous conditions elsewhere.

At Gothenburg in Sweden, the most significant aspect was integrating with the government systems, regulations and requirements – especially in areas such as control of dangerous goods and waste disposal. The single window application is a key to success. Based on a module approach, three sub-programs – the Vessel Clearance System, Marine Service System, and Cargo Management System – cover the spectrum of operations linking port customers, users, management and government authorities.

In developed countries the differences are marginal when new systems are set up, because every port is already heavily computerised. In emerging markets even the most basic computer system can mean a huge step forward. It’s also a big plus when free trade agreements are signed. Customs administrations will zero in on the most efficient port as the designated Trade Zone or bonded manufacturing facility. The more efficient a port, the more likely that it will be used as a trade lane.

In the US, the focus of information exchange is almost solely on safety and security, a consequence of the 2001 terrorist attacks. Commercial and operational information sharing is almost non-existent, and the reason is the extremely competitive culture that pervades business.

The universal opinion is that terminal operators and port authorities jealously guard their business models and details from rivals. It’s all a case of ‘you jump in first’. There is a total refusal to be the first to set up a system – the competitors would be only too happy to plunder the information without giving anything back in return. In complete contrast, the approach to security and safety is “the more the better“. (In South Africa we refer to it as a ‘data rich’ environment). These are undoubtedly interesting times we live in. Source: PortStrategy.com.