Recent good news reports indicating a decrease in rhino poaching have been marred by the sudden death of one of law enforcements top detectives.

Colleagues and friends of Lieutenant Colonel Leroy Bruwer are in shock after the leading rhino-poaching detective was gunned down in an apparent assassination.

Leroy (49), commander of the Hawks in Mbombela (formerly Nelspruit), was shot dead in his car on Tuesday morning while on his way to work.

The investigation is ongoing but according to a police statement, he was shot with a heavy-calibre weapon.

Pieter Smit, commander of the Mbombela police’s quick-response unit, says his heart broke when he arrived on the scene and saw his colleague and friend’s lifeless body.

“Hate, sadness and tears with mixed feelings,” Pieter, who was one of the first people to arrive on the scene, wrote on Facebook.

Leroy’s body had been unrecognisably mutilated by the AK-47 gunfire, Pieter continued his Facebook post. He says the only way he knew it was Leroy is because he called his friend’s number and saw the cellphone ringing in the car.

“It breaks the heart of a grown man. Leroy, you were an honest policeman and worthy officer. You didn’t deserve this.

“I salute you. Rest in peace, colleague and friend.”

Brigadier Hangwani Malaudzi, Hawks spokesman, says a specialised task team has been formed to investigate the murder. “We’re hoping for a breakthrough soon.”

He adds Leroy was a formidable detective and made many breakthroughs in the fight against rhino poaching.

“All the evidence points to Leroy having been the target. It looks like an assassination,” Malaudzi says.

Police are following up on all leads to find the suspects.

As a result of profiling two foreign nationals travelling from Maputo to Vietnam via Johannesburg,  their baggage was intercepted during a stop-over at ORTIA. A Customs detector dog “Mimmo” reacted positively to two bags. The tags found on the bags also did not correspond to the tags presented to Customs officials during the initial questioning of the passengers. This is a practice commonly found with narcotics smuggling syndicates.

The bags had a strong garlic and glue smell, (a tactic to distract detector dogs). Further to the plastic wrapped horns, the zips of the bags were also glued in an effort to keep the odour intact and to make the inspection difficult. Subsequent physical inspection of the bags by Customs officials revealed the rhino horn allegedly being smuggled by the two travellers. Source: SARS 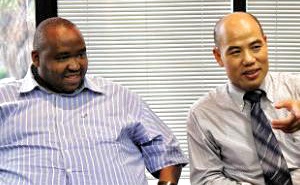 With reference to an earlier post “Trade costs and corruption in Ports of Durban and Maputo” (March 2012) the following article ‘Hawks probe Khulubuse Zuma’s pal’ published by the Daily News (Durban) suggests more sinister individuals involved in the scam which saw a policeman being gunned down at his home and no less than 10 SARS officials placed on suspension. A web of intrigue indeed.

A wealthy South Africa-based Taiwanese businessman and former business associate of Khulubuse Zuma, a nephew of President Zuma, is being probed for alleged links to a multibillion-rand racket at Durban Harbour. In June the Hawks in KwaZulu-Natal secured a warrant of arrest for Jen Chih “Robert” Huang, CEO of Johannesburg-based company, Mpisi 74, when investigators from the elite unit also raided Huang’s business in Bedfordview, and his home.

Huang, a convicted murderer, was in Hong Kong on business when the warrant was issued, and it has not been executed after he side-stepped the Hawks by directly approaching the National Prosecuting Authority (NPA) to make representations as to why he should not be arrested. The businessman, part of a delegation that accompanied President Zuma on a state visit to China in 2010, is wanted on multiple counts of alleged corruption.

According to Daily News, Huang denied having any links to alleged illegal activity at the harbour, and referred all queries to his attorney. “I have been out of the country. “Speak to my attorney in Durban. He is handling all matters related to my company.” His attorney, Quintus van der Merwe, confirmed representations had been made to the State, but declined to comment further.

The warrant for Huang’s arrest came weeks after a former South African Revenue Service (Sars) anti-corruption task team member, Etienne Kellerman, was arrested on 80 counts of alleged corruption. Kellerman, 42, is suspected of receiving substantial benefits for allegedly allowing contraband through the harbour. The Daily News broke the story when Kellerman was arrested in April this year after a three-year covert investigation. An international syndicate that was allegedly bribing customs and police officials to allow in container-loads of contraband, was also exposed by the Hawks.

Sars spokesman, Adrian Lackay, told the Daily News that following the joint investigation with police over several months into the existence of a criminal syndicate operating at Durban Harbour, 10 Sars employees had been suspended. “Their suspensions follow the arrests of other suspects outside of Sars. These employees were suspended over a three-week period following the arrest of Kellerman on charges related to fraud, theft and misconduct,” he said.

“The 10 employees remain suspended pending the outcome of an internal investigation into alleged involvement with clearing agents.” Over the past two years, during this investigation, police seized more than R1 billion worth of counterfeit goods and contraband. The alleged corrupt Sars and police officials are believed to be working in teams between KZN and Gauteng. They are allegedly paid bribes of up to R30 000 for each container allowed to pass through customs undetected. Big name international companies, mainly from China, are also being investigated. Kellerman has pleaded not guilty and is on R100 000 bail.

According to its website – before it was removed – Mpisi 74 is a massive concern, offering a range of services, including import, export, forwarding, warehousing, cellphone telecommunication and machinery, as well as vehicle manufacturing. Just days after Huang was contacted by the Daily News, the website was taken down.It had even boasted pictures of the president’s nephew, Khulubuse Zuma, with the Taiwanese businessman at the company’s headquarters in Bedfordview, on December 9, 2009. The Mail and Guardian, in January, described Huang as the influential middleman in deals between Chinese companies and Khulubuse Zuma. It said Huang was also instrumental in introducing Chinese vehicle manufacturer, Dong Feng Motor Corp, to Khulubuse Zuma, who at one point was the “chairman” of Mpisi.The report said that in 2010, Dong Feng announced a joint venture with Khulubuse Zuma and Huang to distribute its products in South Africa and the rest of the continent.In 1998, Huang was convicted of the murder of a Taiwanese businessman, Ching-Ho Kao, who was found shot dead in March 1996, in the Free State. His body was set alight. The trial began in the Bloemfontein High Court in November 1997. The indictment claimed the motive for the murder was that Kao’s family owed Huang money. Huang was sentenced to an effective 12 years in prison. But, through remission of sentence, he was released in 2003 and set up Mpisi 74.

A 3-year covert investigation into a multi-billion rand racket at the Durban harbour has exposed an international mafia, allegedly bribing customs and police officials to allow in container-loads of contraband.

This week, a former Sars customs official was taken by surprise when Hawks and Sars investigators swooped on his Umbilo home and arrested him on 80 counts of alleged corruption. Etienne Kellerman, 47, a former Sars anti-corruption task team member, appeared in the Durban Regional Court on Tuesday. He was released on R100 000 bail and the matter was adjourned to next week. Kellerman is suspected of receiving substantial benefits for allowing contraband through. It is alleged that Sars lost millions of rand in revenue as a result. He resigned from Sars three years ago, days after he was quizzed by Sars investigators about his alleged role in the racket. His job had been to profile and identify high risk companies and containers entering the country.

A further seven Sars officials from Durban and Johannesburg were suspended for their alleged roles in the smuggling racket. Hawks investigator and project manager of this undercover operation, Colonel Brian Dafel, said that in coming weeks they would swoop on 100 more suspects in the country, including Sars officials, police and syndicate members, on charges ranging from racketeering, corruption, money laundering, extortion, murder and attempted murder.

He said the investigation was triggered by informers who tipped them off about the alleged crooked activities and racketeering at the harbour. The undercover investigation was a joint operation by the Hawks, Sars, independent law enforcement agencies and other key role players, Dafel said. He said they were also closing in on suspects believed to have ordered the hit on Warrant Officer Johan Nortjé, an officer in the police’s protection security service. He was responsible for investigating smuggling of goods and drugs through Durban harbour. A hit was allegedly ordered on his life days after he made a R100m counterfeit bust at the harbour. Nortjé was gunned down outside his Montclair home on January 17 last year, 10 days after he had made the bust.

“Nortjé was one of the few honest cops. He was aware of the container racket and was determined to expose it. He was killed because he was hampering the operation of the syndicate members,” Dafel said.

“This is a very dangerous investigation that involves extremely high levels of corruption. “Durban harbour is the biggest port authority that handles 40 percent of the containers nationally. In the past two years, during this investigation, we have seized over R1 billion worth of counterfeit goods and contraband.” He said that several witnesses had been placed in witness protection programmes as they feared for their lives. “People’s lives have been threatened and hits have been ordered. But, none of this will deter this investigation.

Dafel told the Daily News that investigations had revealed that certain SARS and police officials were working in teams between KZN and Gauteng. “This could not be done alone. They worked in groups, including those who cleared the documentation to those who inspected the containers and gave them the final clearance.

Thousands of containers pass through the harbour daily and it is impossible to check each and every one. That is how the counterfeit goods and contraband got through so easily. The syndicate members also communicate through cellphones making it a very smooth operation. He said every member of the syndicate was paid for his or her role in allowing the illegal goods through. The potential value of the illegal commodities was between R10 and R20 million for each container. The international mafia pays bribes of up to R30 000 per container that is allowed to pass through customs undetected. It is reported that one of the biggest problems is the clearing agents who work in cahoots with the police and syndicate members.

Dafel said many of the SARS and SAPS officials who were being investigated stood accused of allowing counterfeit goods or contraband to enter the country illegally, or under-evaluating containers. Since the investigation started, much stricter measures are in place at the harbour making it difficult to smuggle goods into the country. “We have closed the gap significantly for any form of corruption to take place. Also, staff know that they will be arrested and charged if they break the law,” Dafel said.

He said they were also working closely with people abroad and international law enforcement agencies to close in on the racketeers. “There are big name international companies, mainly from China, that are also being investigated. In fact, the goods imported from China are the biggest problem.” Source: Daily News E-edition