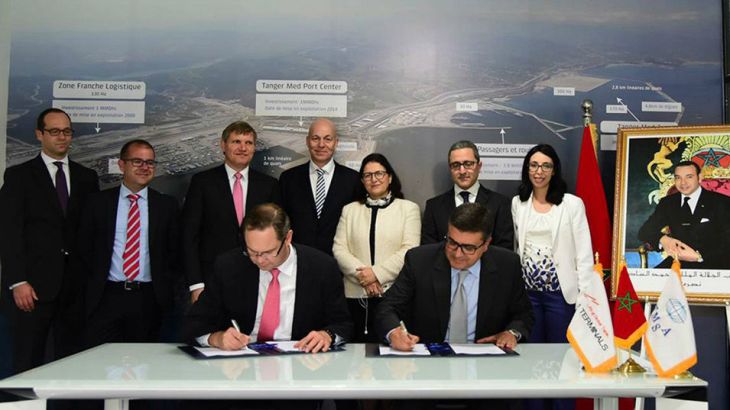 Maritime Executive reports that the world’s third largest port operator APM Terminals said it will invest 758 million euros ($858.3 million) in a new transhipment terminal in Tangier, Morocco, that will be the first automated terminal in Africa.

APM Terminals, a unit of Denmark’s shipping and oil group A.P. Moller-Maersk, has been named as the operator of the new container transshipment terminal at the Tanger Med 2 port complex. The group already operates the APM Terminals Tangier facility at Tanger Med 1 port, which started operations in July of 2007 and handled 1.7 million TEUs in 2015. The new terminal will have annual capacity of five million TEUs.

Maersk Line, also a part A.P. Moller-Maersk, will be an important customer of the new terminal. The new terminal is scheduled to open in 2019, under the terms of a 30-year concession agreement with the Tanger Med Special Agency (TMSA), which has responsibility for the development and management of the Tanger Med port complex.

The Tanger-Med port complex is strategically located on Africa’s northwest coast near the mouth of the Mediterranean Sea on the Strait of Gibraltar, where the Atlantic Ocean and Mediterranean Sea meet. Tanger-Med is the second-busiest container port on the African continent after Port Said, Egypt. The new APM Terminals MedPort Tangier terminal will increase the port’s total annual throughput capacity to over nine million TEUs.

APM Terminals MedPort Tangier will have up to 2,000 meters of quay length and will feature the technology pioneered at the APM Terminals Maasvlakte II Rotterdam terminal which opened in 2015.

The location of the Tangier and Algeciras facilities provide a natural transshipment location for cargoes moving on vessels to and from Africa from Europe and the Far East on the primary East/West shipping route through the Mediterranean Sea; over 200 cargo vessels pass through the Strait of Gibraltar daily on major liner services linking Asia, Europe, the Americas and Africa.

While African ports at present account for only 4.5 percent of global port throughput (including transshipment cargoes), the United Nations 2015 World Population Prospects Report projects that more than half of the world’s population growth between 2015 and 2050 will occur in Africa, with the African population more than doubling from 1.1 billion to 2.4 billion over the next three and a half decades.

Significant investment in port and transportation infrastructure will be required to meet the anticipated needs of the expanding African population and corresponding economic growth.

APM Terminals is the largest port and terminal operating company in Africa by equity-weighted container volume, with 12 facilities operating in 10 countries and three more terminals under construction. Source: Maritime Executive

South Africa has been crowned as the African Country of the Future for 2013/14 by fDi Magazine, One of the economic powerhouses of the African continent, South Africa has been named fDi Magazine’s African Country of the Future 2013/14, with Morocco in second position and Mauritius in third. New entries into the top 10 include Nigeria and Botswana. Click here to access the full report!

South Africa has consistently outperformed its African neighbours in FDI attraction since fDi Markets records began in 2003. Figures for 2012 build upon South Africa’s historical prominence as an FDI destination with the country attracting about one-fifth of all investments into the continent – more than double its closest African rival, Morocco. In 2012, FDI into South Africa amounted to $4.6bn-worth of capital investment and the creation of almost 14,000 jobs.

South Africa claimed the title of fDi’s African Country of the Future 2013/14 by performing well across most categories, obtaining a top three position for Economic Potential, Infrastructure and Business Friendliness. Its attractiveness to investors is evident in its recent FDI performance, where the country defied the global trend with 2011 and 2012 figures surpassing its pre-crisis 2008 statistics. Despite a slight decline of 3.9% in 2012, South Africa increased its market share of global FDI, which further increased in the first five months of 2013 as the country attracted 1.37% of global greenfield investment projects. According to fDi Markets, South Africa now ranks as the 16th top FDI destination country in the world.

South Africa’s largest city, Johannesburg, was the top destination for FDI into Africa and is one of only five African cities that attracted more investments in the first five months of 2013 compared to the same period of 2012. South Africa ranked third behind the US and the UK as a top source market for the African continent in 2012, accounting for 9.2% of FDI projects.

In 2010, South Africa became the ‘S’ of the BRICS – five major emerging national economies made up by Brazil, Russia, India and China. While FDI into South Africa fell 3.9% in 2012, this was the lowest recorded decline of the BRICS grouping which, on average, experienced a 20.7% decline in FDI. In its submission for fDi’s African Countries of the Future 2013/14, Trade and Investment South Africa (TISA) stresses the importance of the country’s attachments to its BRICS partners. Source: fDI Magazine