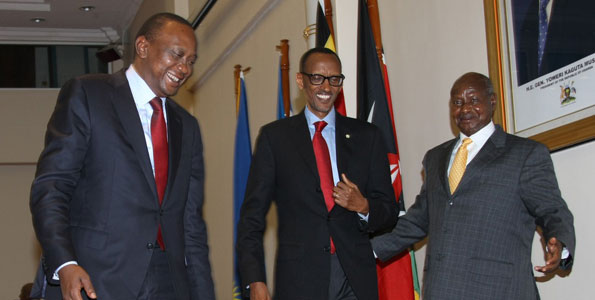 Presidents Uhuru Kenyatta (Kenya), Paul Kagame (Rwanda) and Yoweri Museveni after the trilateral talks in Entebbe, Uganda. President Jakaya Kikwete of Tanzania and Pierre Nkurunziza of Burundi stayed out of the loop of the third infrastructure summit in Kigali, Rwanda on Monday. [Photo/PPS]

Kenya, Uganda and Rwanda have postponed the single customs territory (SCT) roll-out, giving Burundi and Tanzania more time to prepare for the shift.

East Africa Community (EAC) secretariat custom officer Ally Alexander told the committee on Communication, Trade and Investment in Mombasa that the implementation of the model would begin in June.

“We are looking at reducing the costs and number of days to clear the cargo from Mombasa to Kampala to take three days instead of the previous 18 days,” Mr Alexander said.

The SCT was initially planned to begin in January with the three countries moving their revenue staff to common entry and exit points to begin goods clearance. But Tanzania and Burundi protested their exclusion in the arrangement after Kenya announced in January that it was ready to start accommodating revenue officials from the two landlocked states in Mombasa, prompting the three States to go slow on their plans.

On Monday, Mr Alexander told East African Legislative Assembly that SCT would reduce the cost of doing business and bring efficiency in trade. He said for exports within the region, a single regional bond for cargo would be issued to cater for goods from the port of Mombasa to different destinations.

An electronic cargo tracking system would also be used to avoid diversion of goods into the transit market. Under the model, goods will be checked by a single agency on compliance to regional standards and instruments.

“We want to avoid agencies replicating checking on standards, when it is done once this will not be repeated,” he said.

Mr Alexander said goods would be released upon confirmation that taxes have been paid and customs procedures fulfilled.

However goods heading to the Democratic Republic of Congo which is not a member of EAC will be cleared on a transit basis.

The establishment of SCT has raised concerns among stakeholders, key among them the registration of clearing agents and job losses. Kenya Revenue Authority deputy commissioner customs Nicholas Kinoti said the concerns would be addressed through legislations. Source: http://www.businessdailyafrica.com