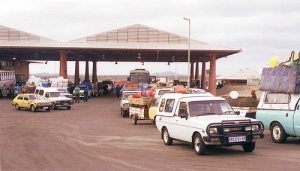 Yes, you’ll be forgiven if you thought this was some belated April-fools joke. South Africa has been accused of frustrating plans to create a regional customs union and instead preferring to bolster the South African Customs Union (Sacu), where it holds sway.

A customs union is a trade agreement by which a group of countries charge a common set of tariffs to the rest of the world, while granting free trade among members. Regional Integration minister, Priscilla Misihairabwi-Mushonga, said there was a feeling that South Africa wanted to use Sacu as its basis to form a regional customs union, instead of working towards creating a new one.

“What we see is that South Africa wants to use Sacu as the basis for forming a regional customs union and sometimes, this is viewed as having a big brother mentality,” she said. Misihairabwi-Mushonga said, for this reason, negotiations towards a holistic Southern African Customs Union (Sadc) had not gone very far. Botswana, Lesotho, Namibia, Swaziland and South Africa make up Sacu, with the four countries having benefited by aligning themselves to South Africa, Africa’s largest economy. A Sadc customs union would involve the 15 countries of the region, instead of Sacu, which is considered narrow.

But Catherine Grant, the head of economic diplomacy at the South African Institute of International Affairs, reckons the smaller nations in Sacu, like Lesotho, may be opposed to Sacu morphing into a regional customs union. “This will be opposed by other Sacu members, not necessarily just South Africa, as this (Sacu) is not just a trade agreement, but involves a broader range of economic issues,” she said.

“Up to 60% of the Lesotho budget is Sacu revenue, so the vested issues, whether Sacu is the basis of a customs union, are not just South African.” Grant felt that it was impossible to expand Sacu in its current form, as it would cost South Africa too much and would dilute the resources that were meant for other projects.

The head of the trade and policy think-tank said instead, South Africa preferred to see the implementation of a free trade area (FTA) as a first step, since customs union negotiations were usually lengthy and time-consuming. “The preference is to first channel scarce resources to existing commitments and trying to make them as beneficial as possible,” she explained.

Grant said while South Africa was the dominant player in the region, hence engendering a feeling that it was imposing itself as the big brother, the country was actually holding back from taking a leading role and this cost the region.

“Sometimes South Africa holds back because they are conscious of not being a big brother and that could be detrimental to the region,” she explained. However, Grant said energies should be directed towards the conclusion of negotiations to set up the Tripartite Free Trade Area (TFTA), which includes the Common Market for East and Southern Africa, the East African Community and Sadc.

“The TFTA will resolve some of the overlapping issues that can be difficult to solve when it comes to a customs union,” she said. Since Zimbabwe adopted multicurrencies in 2009, there has been a call that the nation either join Sacu or push for the formation of a regional customs union. Zimbabwe remains wary of joining Sacu, as it fears for its economic independence, yet negotiations for a regional customs union are moving at a snail’s pace.

Sacu was established in 1910, making it the world’s oldest customs union. It consists of Botswana, Lesotho, Namibia, South Africa and Swaziland. Source: AllAfrica.com