The current activity conducted by forwarding agents is not only limited to inter-mediating the foreign trade or deal with the clearance of goods at customs ports, said Tuesday the economist Osvaldo Luis da Silva.

Speaking to ANGOP on the role of forwarding agents in domestic economy, the economist spoke of the need for the agent to know the entire services chain of operators with whom they work. He stressed that the forwarding agents facilitate, through the service they provide, the relationship of importers and exporters with customs, tax offices, notaries, banks and other entities.

It is also their responsibility to observe and enforce the administrative requirements and law. On the other hand, said the expert, the forwarding agent is a guide or customs consultant for operators, who acts in the field of import and export and plays an important role in the economy.

He noted that these professionals have contributed to the increase in customs revenue and encourage the observance of customs procedures by operators engaged in import and export activity. Osvaldo Luis da Silva underlined that the Angolan Government updated the Customs Tariff to promote domestic production and sustainable economic development of the country.

The entry into force of this law does not cause any inconvenience to the work performed by the forwarding agents, he said. On the other hand, added the economist, the law has come at a good time and is satisfactorily facilitating their work. Source: Angola Press Agency

The government of Cunene province in southern Angola, has chosen the border town of Calueque, in Ombadja municipality, to set up the province’s Special Economic Zone (ZEE), the province’s governor, António Didalelwa said in Ondjiva speaking to Angolan news agency Angop. At the end of a meeting of the provincial government, the governor said that Calueque had been chosen due to its potential to drive agri-livestock activities based on the Cunene River’s hyrodgraphic basin and the Calueque hydroelectric facility. Its proximity to Namibia, its conditions in terms of available electricity and water, as well as access roads make it possible to set up economic and administrative facilities in order to drive production and job creation. The entities that attended the provincial government meeting concluded that the existing conditions at the new ZEE would attract investments and drive production by installing factories, retail and services areas. This follows last year’s fomalisation of the Luanda-Bengo Special Economic Zone (SEZ) between the towns of Viana and Cacuaco in Luanda province and the towns of Icolo-e-Bengo, Dande, Ambriz and Namboangongo in Bengo province. Watch a short video on the Luanda-Bengo ZEE here! Source: Macauhub.com.

The Programme to Expand and Modernise Customs Services (PEMA) in Angola, which began in 2002 and officially ended Monday 21 May, cost US$315.5 million, Angolan weekly newspaper Expansão reported. The newspaper added that in a 10-year period the PEMA had led to US$17.7 billion going to the State’s coffers and thus the cost of the programme was just 1.8 percent of the revenues that it had made possible.

During the ceremony to mark the end of a partnership with Crown Agents, a UK company that specialises in modernising public services, the assistant director general of the National Customs Service, Maria da Conceição Matos, said that whilst the programme was being implemented customs revenues had increased steadily and significantly. Matos said that the Programme for Expansion and Modernisation of Customs Services had reformed the institution structurally across the whole of Angola, based on international best practices for the customs sector.Source: Macauhub.com. 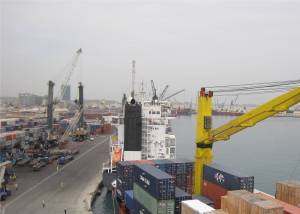 Nearly one in three African countries is landlocked, accounting for 26% of the continent’s landmass, and 25% of the population, or more than 200 million people, indicating that current population growth trends, including the development of population megacities distant from coastal locations will become powerful drivers of inland markets.

At the 3rd Annual Africa Ports, Logistics & Supply Chain Conference, APM Terminals’ Director of Business Development and Infrastructure Investments for the Africa-Middle East Region, Reik Mueller stated that “Ports will compete to become preferred gateways to move goods efficiently to inland cities and landlocked countries” Mr. Meuller added that “The future prosperity of these nations depends on access to the global economy and new markets; high-growth markets need inland infrastructure and logistics capabilities along development corridors. The ports that can provide the best and most efficient connectivity to those Inland markets will be the winners”.

Citing the recent success in reducing port congestion through Inland Container Depots (ICDs) now in operation outside of the APM Terminals operated port of Luanda, Angola, the Meridian Port Services joint venture in Tema, Ghana, and the ICD which was opened four km from APM Terminals Apapa, the busiest container terminal in Nigeria and all of West Africa, Mr. Mueller made the case for integrated transportation solutions, “Importers are not going to wait for improved infrastructure; the cargo will simply move to other ports” said Mr. Mueller.

Mueller described a new model for transportation planning and development in West Africa in which port and terminal operations shift focus from “container lifts” toward “integrated container transport solutions. Dry ports and inland markets are the untapped, overlooked opportunity markets of the future in Africa”. Now ain’t this a contrast to views on the southern tip of the continent – the continent’s biggest port without efficient inland corridors and networks must jeopardize investor confidence not to mention export profitability.   Sources: DredgingToday.com, PortStrategy.com and Greenport.com.