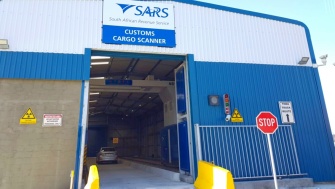 South African Customs has introduced non- intrusive inspection (NII) capability at the Port of Cape Town. The recent completion of an impressive relocatable scanner facility within the port precinct will now afford state of the art inspection services for customs targeted consignments for inspection. This is the third X-Ray scanner installed and operated by the South African Revenue Service (SARS).

The new facility in Cape Town not only extends customs risk and enforcement capability in the use of such technology but acts as a deterrent against any possible threat posed by international cargoes entering or leaving the country’s ports of entry.

In addition to the new x-ray inspection hardware, SARS has developed bespoke support to allow scanned images to be reviewed remotely – away from the port area – affording customs increased flexibility, allowing image analysis experts elsewhere in the country to provide almost real-time analysis and support for the inspection team. The approach also meets SARS differentiated inspection case methodology which ensures that case finalization and cargo release does not rest with a single customs official.

Remote screening analysis is a practice that has already been pioneered in Europe with great effectiveness in recent years.

The benefit of non-intrusive inspection (NII) allows customs to ‘see whats inside’ the container, vehicle or tanker without having to break the seal. All of this can be done in a few minutes. It forms part of Customs overall approach to minimise the time taken to conduct a customs intervention and latent cost, damage and theft which plague conventional physical inspection of cargoes.

The new inspection site also enables SARS to increase its participation and effectiveness in the US Container Security Initiative (CSI) which was launched in Durban, December 2003. Under the CSI Agreement, SARS officials together with US Customs & Border Protection Agency (USCBP) officials – co-located at the Port of Durban – analyze and mitigate risks relating to any containerised cargo destined to ports in the United States.

Credit to Indresan Reddy (Customs Business Systems) for the photographs. 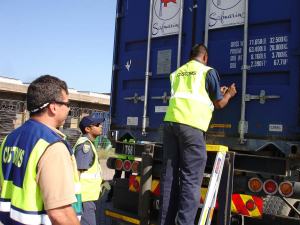 US Customs CSI Inspection in the Port of Durban, South Africa

Customs and Border Protection (CBP) has not assessed risks at select foreign ports with U.S.-bound shipments since 2005, part of a string of failures that has left key ports without a CBP presence, the Government Accountability Office says. (Hmm, never mind the impact caused to Customs administration in the host countries……)

In examining CBP’s Container Security Initiative program, GAO found that the agency developed a model for ranking additional seaports according to risk in 2009, but never implemented it because of budget cuts, according to the report.

GAO applied that risk model to 2012 cargo shipment data and found that the CSI program had no presence at about half the ports CSP found high risk. Meanwhile, 20 percent of existing CSI program ports were at lower-risk locations, according to the findings (.pdf).

Although GAO acknowledged host countries are not always willing to accommodate a CSI presence, and that removal of a CSI presence can negatively affect diplomatic relations, auditors said periodic assessments of cargo shipped from foreign ports could help CBP better guard against terror-related shipments.

Although there have been no known incidents of cargo containers being used to transport WMD, the maritime supply chain remains vulnerable to attacks. We recognize that it may not be possible to include all of the higher-risk ports in CSI because CSI requires the cooperation of sovereign foreign governments.

To better ensure the effectiveness of the CSI program, GAO recommends that the Secretary of Homeland Security direct the Commissioner of U.S. Customs and Border Protection to periodically assess the supply chain security risks from all foreign ports that ship cargo to the United States and use the results of these risk assessments to (1) inform any future expansion of CSI to additional locations and (2) determine whether changes need to be made to existing CSI ports and make adjustments as appropriate and feasible.

Such assessments “would help ensure that CBP is allocating its resources to provide the greatest possible coverage of high-risk cargo to best mitigate the risk of importing weapons of mass destruction or other terrorist contraband into the United States through the maritime supply chain,” GAO said.

The Department of Homeland Security (DHS) concurred with the recommendation and said CBP would complete its first assessment by Aug. 12, 2014. To access or download the GAO Report on CSI, Click Here! Source: US Government Accounting Office 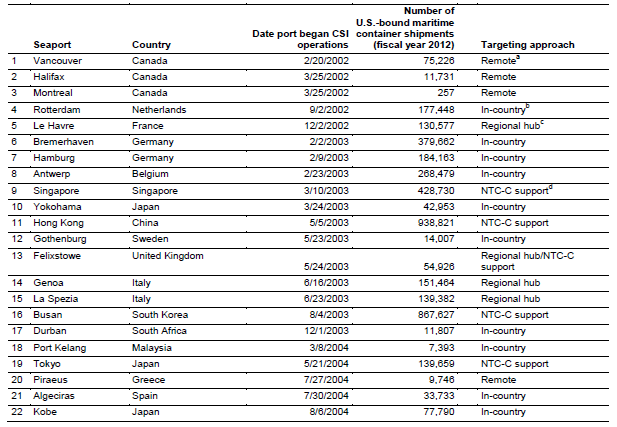 Foreign Ports That CBP Coordinates with Regarding Maritime Container Shipment Examinations, as of July 2013 (Table: GAO) 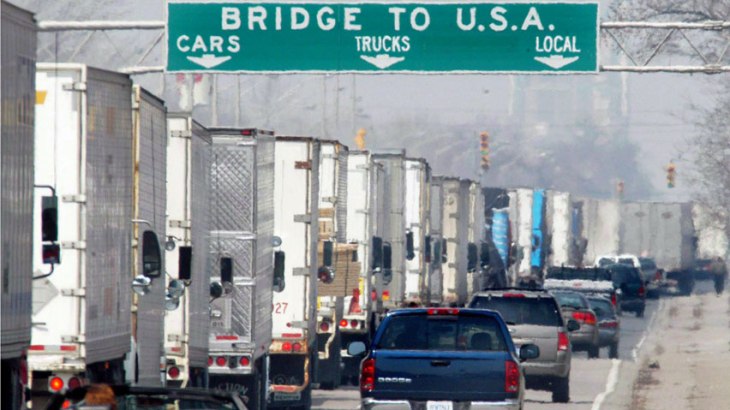 “Uncertain Times” – U.S. Homeland Security Secretary Janet Napolitano said earlier this week that her department would be slashing 5,000 border-patrol agents when the cuts go through, which would ultimately slow some of the busiest crossings between Canada and the U.S.

Is this a process of auto-destabilisation in the USA? At least terrorists aren’t being blamed for this……will be interesting to see what instructions are fed to CBP (US Customs) Field Operations in foreign countries where the Megaports and CSI initiatives are in operation. Besides being grave times , I’d say these are interesting times…

Lloyds reports that the US Customs and Border Protection (CBP) is warning of major delays for incoming containers and other cargo at seaports because of sequestration, but early reports suggest that business is operating normally on arterial waterfronts, at least for now.

In a letter to cargo and travel industry groups after automatic cuts to federal spending, known as sequester cuts or sequestration, went into effect at the weekend, CBP deputy commissioner David Aguilar said the agency faced “furloughs, reductions in overtime and a hiring freeze, [which] would equate to the loss of up to several thousand CBP officers at our ports of entry, in addition to significant cuts to our operating budgets and programmes”.

Describing the current phase as an “uncertain time”, Aguilar warned of major disruption for travellers and cargo.

For the latter, sequestration could result in “decreased service levels in our cargo operations, including increased and potentially escalating delays for container examinations of up to five days or more at major seaports, and significant daily back-ups at land border ports of entry”.

CBP also issued a set of “cargo priorities under sequestration”, which vowed that security would not be compromised, but said that “CBP has redirected resources toward only the most critical, core functions and discontinued or postponed certain important but less critical activities in an effort to reduce budget expenditures”.

The agency said it would hold weekly conference calls to update the industry about the situation.

Shippers and cargo interests agreed that five-day delays could cause major bottlenecks at container ports, and would cost shippers extra money during an already challenging economic time.

The only consolation would be that individual ports or shippers would not have to worry about rival ports siphoning business away, because every US port would be up against the same problem.

The Port Authority of New York and New Jersey reported normal operations and said in a statement that it continued to monitor the situation.

“I do not think sequestration at one cent on the dollar is going to have grave effect, or anybody is going to notice it all that much, except for some federal employees who will be furloughed,” He told a press conference.

The sequester cuts $85 billion, or 2.4% of the annual federal budget of $3.6 trillion, to be spread over seven months to September 30.

Roughly half the sum involves defence, and there appears to be discretion in where precisely the cuts are administered.

Nevertheless, the shipping industry is taking the matter seriously. Other than cargo delays, the maritime sector is factoring in reduced maintenance dredging and a degradation of some US Coast Guard functions, including search and rescue, as possible effects of the sequester cuts. Source: LloydsList