Today’s ship photos come to us via Hong Kong, where on May 2nd internationally renowned artist Florentijn Hofman’s Rubber Duck project made its way into the harbour. The duck measures 16.5 meters tall, easily dwarfing its escort tugs.

About the project from the Hofman’s website (because it makes more sense when he explains it): The Rubber Duck knows no frontiers, it doesn’t discriminate people and doesn’t have a political connotation. The friendly, floating Rubber Duck has healing properties: it can relieve mondial tensions as well as define them. The rubber duck is soft, friendly and suitable for all ages.

Since 2007, the duck has been making its way around the world and has already been seen in St. Nazaire, Sao Paulo, Auckland, Hasselt ,Osaka and Hiroshima, Sydney, Nürnberg, and Amsterdam, among other places. But Hofman’s art isn’t just limited to giant rubber ducks. He also has a Fat Monkey, Slow Slugs, and Mickey the Pig exhibits on display in cities throughout the world. The Rubber Duck will be in Hong Kong until June 9th. 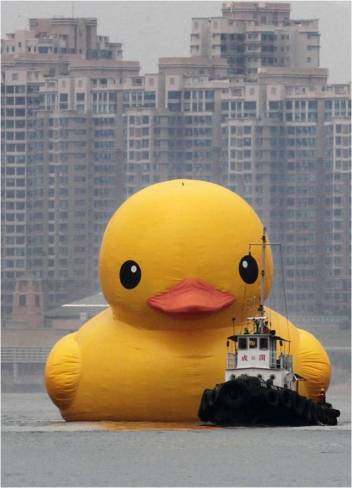 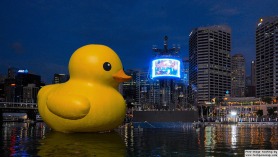 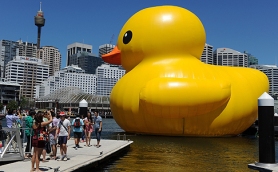