I received the following pictures purportedly of traffic under siege at the Beit Bridge border post 6 days ago. Normally its the sweltering heat which man and truck have to contend with. The pictures suggest severe flooding creating anxious moments for transporter and pedestrian alike. According to the Zimbabwe Herald, authorities closed the border to traffic after the Limpopo River flooded leaving the new Limpopo Bridge inaccessible. 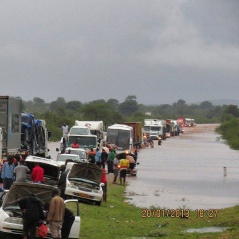