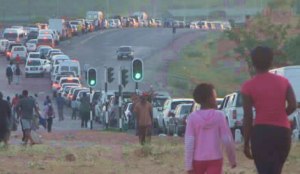 The queues at Beit Bridge

Beitbridge Border Post recorded a sharp increase in the number of travellers who passed through during the festive season with statistics indicating that 524 511 people passed through the port of entry between 14 December last year and 7 January this year compared to 392 660 during the same period the previous year. The assistant regional immigration manager in charge of Beitbridge Border Post, Mr Charles Gwede, said they handled  229 023 travellers on the exit side, an 11 percent increase compared to the last festive season when 202 348 people left the country.

“This festive season between 14 December and 7 January, we handled 524 511 travellers, marking a 25 percent increase in the number of people who passed through Beitbridge during the festive season compared to the previous year when we handled 392 660 travellers,” said Gwede. Most of the travellers that they handled were Zimbabweans working in South Africa commonly known as injiva, who had visited home for the Christmas holidays. He attributed the increase in the number of travellers to the South African documentation exercise, which saw many Zimbabweans working in that country acquiring permits.

Many of Zimbabweans staying and working in South Africa are now documented after they acquired authentic permits during the regularisation exercise in that country hence they could now travel freely. The documents also enabled them to drive foreign registered vehicles, which is another factor that resulted in an increase in the volume of vehicular traffic during this festive period compared to the previous years. The South African government embarked on the process of documenting Zimbabweans illegally staying in that country between 5 May 2009 and 31 July 2010 during which over 275 000 applications from Zimbabweans were processed while several others were turned down and some are still pending. Source: The Chronical, Zimbabwe