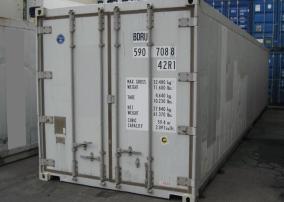 Container weight misdeclarations will compromise safety if new rules are accepted to allow 10 per cent more cargo aboard ships in the 4,000- to 16,000-TEU range, says the International Transport Workers’ Federation (ITF).

The Lloyd’s Register liberalisation proposals to increase the stacking of boxes on board is backed by the forwarding lobby FIATA (Federation Internationale des Associations de Transitaires et Assimiles), but ITF port representative Albert Le Monnier says the measure is “absurd” without the verification of weights of laden containers before loading. “Look at the problem of misdeclaration we’re experiencing,” said Mr Le Monnier, former vice-president of Canada’s west coast section of the International Longshore and Warehouse Union (ILWU).

“As a rule, self regulation has a very poor record.” The World Shipping Council (WSC), the Baltic and Maritime Council (BIMCO) and International Chamber of Shipping (ICS) as well as the US, Denmark and the Netherlands are seeking verification of weight of loaded containers as a pre-loading condition for ships.

The practice needs to be shared or to be assigned to the shipper, consignor or consolidator through a system of roadside weigh bridges en route or have a weigh bridges at the terminal, said Mr Le Monnier, reported the London’s Loadstar.

The cost to the terminal operator would be passed on to carriers, then on to the shipper, and ultimately end up in a negligible consumer end-price, said Mr Le Monnier. It is essential, he said, that any weighing verification of loaded containers isn’t rushed through without careful thought by the IMO “correspondence group” due to report back by June 2013, ahead of the deadline for deliberation in September on the issue.

Stacking weights differently aboard could increase cargo 10 per cent for 18,000-TEU vessels allowing for operational flexibility, said the Lloyds Register marine director Tom Boardley. “These results indicate clearly that we will be able to allow much higher cargo weights and enable more operational flexibility – and to do this in safety,” he said. “The potential in cargo increase is considerable.” Source: http://www.seanews.com.tr