SARS Customs recently launched its new X-Ray cargo inspection facility adjacent to the Durban Container Terminal in the Port of Durban. Following the trend as in other countries, SARS has identified non-intrusive inspection capability as part of its ‘tiered’ approach to risk management.

In 2008, SARS introduced its very first mobile x-ray scanner which was located inside the Durban container terminal precinct as part of South Africa’s participation in the US Container Security Initiative (CSI). While it has proven itself in the development of Customs NII capability, its location and lack of integration with other Customs automated tools has limited its success.

The new Customs inspection facility is a step-up in technology and automation – a Nuctech MB 1215HL Relocatable Container/Vehicle Inspection System. It has some significant advantages over the original mobile version namely –

Since its launch more than 350 scans have been performed. Suspect containers were sent for full unpack resulting in various positive findings.

The new relocatable scanner is easier to operate and significantly faster than the mobile scanner. In addition, scanned images are now automatically integrated into SARS Customs case management and inspection software making case management both seamless and efficient.

It is anticipated that until October 2014, both the new scanner and the existing mobile scanner operations will co-exist. During this time, the new scanner will operate risk generated cases directly from SARS automated risk engine. Unscheduled or random interventions will continue to occur at the old scanner site, which operates 24/7.

Plans are in place to decommission the mobile scanner after October 2014. The new scanner will then operate on a 24/7 basis.

Against the backdrop of doom and gloom predictions by some managers in industry, Homeland Security Research Corporation analysts forecast a strong comeback of the X-ray security industry generating a solid 7% CAGR. The growth will be boosted by three main drivers:

According to HSRC’s report, “X-ray Security Screening: Technologies and Global Industry & Market – 2014-2020“, the global X-ray security screening industry revenues (including systems sales and aftersales service and upgrades) is forecasted to grow from $1.6 billion in 2013 to $2.6 billion by 2020.

With more than 690 pages, 254 tables and 324 figures, the new report is the most comprehensive review of the multibillion-dollar global X-ray security screening market, industry and technology trends published to date. The report analyzes each and every dollar of the industry revenues and provides data and analysis on 89 submarkets including submarket 2011-2013 data and 2014-2020 forecasts and analyses. The report addresses the “money trail” of each dollar spent via 5 viewpoints:

The report analyzes the X-ray industry and technologies from several perspectives, including:

Each new report from Homeland Security Research Corporation features more and more detailed analyses on this market. Of particular interest is the ‘country analysis’ which demonstrates just how refined this market is developing. All of this comes at a hefty price tag – starting at US$ 4,450 for a single user PDF!

Zambia Revenue Authority (ZRA) Commissioner General, Berlin Msiska, says the investment of scanners in borders will help yield additional revenue for government. And ZRA Commissioner for Customs, Dingani Banda, says the introduction of the scanner will enable the authority to take five minutes only to inspect a truck, not five hours as was the case in the past. Commissioning a non-intrusive inspection equipment or scanner at Chanida border on Tuesday, Msiska said the equipment would help in facilitating trade.

He said instead of carrying out several physical inspections as was the case previously, ZRA would now be using a scanner.

“Through the use the scanner, we might get possible concealment in the trucks, but what we now intend to do, which we have always done as ZRA is that where we find that goods are being smuggled into the country, we are going to take stern action against those in borders. This will include an aspect of prosecution. Now, we have also intensified operations inland in that we have established a mobile compliance unit to deal with the inland enforcement of certain smuggled commodities,” Msiska said.

And Banda said the implementation of the scanner at Chanida border would help ZRA in a number of ways. He said previously, if they suspected that a truck could be carrying goods that might require physical inspection, they would take an average of five hours to do the inspection.

“Now, with the scanning technology, it takes less five minutes for us to do a physical inspection of a truck and for a station like Chanida where we have an average of 40 to 50 trucks coming in and going out of the country on a daily basis, this will help us in terms of the turnaround in the inspection and it will enhance our inefficiencies,” Banda said.

He said ZRA already had similar infrastructure at Chirundu, Katimamulilo and Kazungula borders. Banda said ZRA was also expecting rail scanners at both Kapiri-Mposhi and Kasumbalesa. Comment – Seems like another ‘juicy’ deal for the Chinese – Nuctech?

He also said other scanners were under construction at Mwami and Nakonde borders. Chanida border post is the main gateway to neighbouring Mozambique. Source: The Post Online (Zambia) 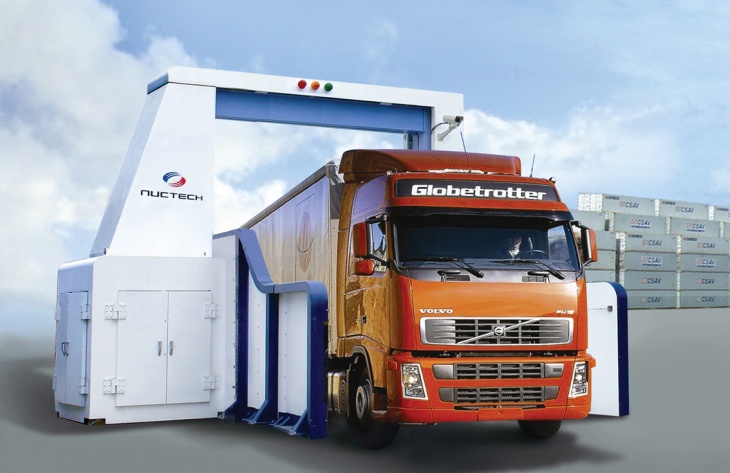 Part of the problem here is that the Chinese have a significant market share in this type of equipment. In a short period of 10 years they have outstripped some of the more fancied American and European players in this business. While the dispute in question raises ‘ethical’ questions of the Chinese, it does seem to be a matter of sour grapes.

China’s anti-dumping duties on imports of x-ray security scanners from the EU violated global trade rules, according to a WTO panel ruling that was issued yesterday. [WTO Dispute Settlement, DS425]

Brussels brought the dispute in July 2011 after Beijing imposed duties ranging from 33.5 to 71.8 percent on the x-ray scanners. (See Bridges Weekly, 25 January 2012) The EU exports approximately €70 million of these scanners to China annually.

China imposed the duties after the EU had applied anti-dumping duties on Chinese cargo scanners one year earlier, which some viewed at the time as a “tit-for-tat” move.

The panel report primarily focused on procedural issues in Beijing’s investigation, specifically regarding how China calculated the anti-dumping margin, loosely defined as the difference between the price – or cost – in the foreign market and the price in the importing domestic market.

Beijing included more expensive “high-energy” scanners – which do not “look remotely like” the cheaper scanners, according to the panel report – in calculating the average domestic price, even though only cheaper “low-energy” scanners were exported. The panel found that this price comparison was “not consistent with an objective examination of positive evidence” required under WTO rules.

The panel also found that Beijing did not comply with certain due process and transparency requirements before imposing the duties.

The panel did not rule with the EU on all points, however, noting that Brussels had not established that Beijing had acted inconsistently in certain other procedural matters.

“I expect China to remove the measures immediately,” EU Trade Commissioner Karel De Gucht said on Tuesday in response to the panel ruling. “I will not accept tit-for-tat retaliation against European companies through the misuse of trade defence instruments.”

Under WTO rules, both sides have 60 days to appeal the ruling. In a statement, China’s Ministry of Commerce indicated that they would make a serious assessment of the case and reserved the right to appeal.