Angola’s minister for trade, Rosa Pacavira states that Angola may only join the SADC Free Trade Zone only in 2017.

The minister said that joining the Free Trade Zone would only happen when Angola had finished its membership road map, which is currently being drawn up, but noted that Angola’s entry “remains on the government’s agenda as part of its regional integration policy.”

“We are drawing up a road map and we will see if, by 2017, Angola manages to join the Free Trade Zone, but for that we will have to create industry and internal capacity so that Angola can compete with other countries that are already part of the zone,” said Pacavira.

“If we open up the market now we will stop producing a lot of things that we need to produce, because if Angola joins up now we will have the whole of the SADC selling products here and we will not be producing them,” she said.

The SADC Free Trade Area was set up in Johannesburg in August 2007, at the 28th SADC summit, and currently includes South Africa, Botswana, Lesotho, Malawi, Mauritius, Mozambique, Namibia, Swaziland, Tanzania, Zambia, Zimbabwe and Madagascar. The SADC countries that did not join are Angola, the democratic Republic of Congo and the Seychelles. Source: www.macauhub.com 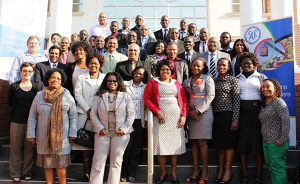 The SADC Customs Training of Trainers Programme 2013-2015 was initiated recently from 26-30 August 2013 on ‘Communication and Facilitation Skills’ at the South African Revenue Service (SARS) Academy, Pretoria, South Africa. The objective of the training was to give the trainers the necessary skills and expertise to teach Customs officials and stakeholders in an effective and professional way.  The training was attended by forty (40) participants from 14 SADC Member States.

The SADC Customs Training of Trainers Programme 2013-2015 was approved by the Sub Committee on Customs Cooperation (SCCC) in May 2013. The main objective of the programme is to provide technical and professional support to the implementation of the SADC Protocol on Trade, particularly in view of the contribution of Customs Administrations to the successful implementation and consolidation of the SADC FTA. It is therefore meant to support implementation of agreed instruments and programmes under the SADC Protocol on Trade.

The programme is being in collaboration with the World Customs Organization (WCO), the Regional Office for Capacity Building (ROCB),the Regional Training Centres and GIZ. The first Customs technical training under this programme will be on the SADC Rules of Origin in November 2013 with the objective to establish a poll of trainers on the subject in the region. Source: SADC Secretariat

The first round of negotiations to establish a free trade area covering 27 countries in southern and east Africa will kick off on December 8, in Nairobi. It is envisaged that the negotiations will be completed in 36 months. (Really?)

The three trade blocs involved – the Southern African Development Community (SADC), the East African Community (EAC) and the Common Market for Eastern and Southern Africa (COMESA) – decided in October 2008 in Kampala to move towards a free trade agreement.

The intention is to boost intra-regional trade because the market will be much bigger, there will be more investment flows, enhanced competitiveness and the development of cross-regional infrastructure.

Industrialisation, making goods to sell instead of selling primary products, is a possible and also necessary spin-off. Competition with older established and also bigger emerging economies might be a stumbling block initially, but the huge new market may make it possible for locally manufactured goods to compete with those imported from outside the FTA.

Close to 600 million people live in the FTA with a gross domestic product of $1 trillion – suddenly we are boxing in the same weight division as China, India, Russia, Brazil, the US and the EU. Source: All Africa.com.

Comment: Heard all of this before?  It could be hoped that some positive developments will materialise from more talkshops with promises to alleviate poverty and increase Africa’s slice of the international market. While the retail and telecommunications industries have made significant inroads into Africa, manufacturing remains a moot point. Does Africa have the political will to take risks? Removing internal border controls for instance are not high priority for sovereign governments. Neither for that matter is the question of the integrity of officials who man these borders. And, neither is the matter of removing one of the key contributors to cross border fraud – the “paper customs declaration”. Nonetheless, attempts are still being made to redress these ills. Recent developments within SACU indicate a genuine move towards customs-2-customs information exchange based on the ‘Customs Inter-connectivity’ concept. More on this shortly.