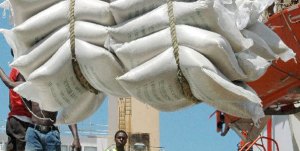 Workers offload imported sugar at the port of Mombasa. Comesa has already gazetted transit goods routes, which have been geo-fenced and trucks following these routes will be monitored. Photo/File Nation Media Group

A new online system being implemented by the Common Market for Eastern and Southern Africa (Comesa) trading bloc is expected to cut down non-tariff barriers, reduce the cost of doing business and improve intra-regional trade.

The $1 million (Sh84 million) system – which is being developed by Comesa and funded by the European Union – could for instance cut transport costs by up to 40 per cent, Comesa secretary-general Sindiso Ngwenya said.

Besides tracking cargo from origin to destination, the system will facilitate management of transit bonds and capture electronic data contained in the customs seal and assign this information to customs offices at various transit points.

Comesa has already gazetted transit goods routes which have been geo-fenced and trucks following these routes will be monitored. In case seals are tampered with, owners will automatically be notified via Short Message Services (SMSs) or email. Owners who register their trucks with the system will display a ‘Comesa Transit’ plate on their vehicles.

Delays along the major transport corridors arising from lengthy procedures at weight control points and police road blocks within the region have been identified as major non-tariff barriers hindering trade.

Mr Charles Muita, a member of the team that worked on the system and who made the presentation, said they expected most of the countries where industry players do not have their own systems to quickly adopt CVTFS. “The system does not intend to replace the ones used by member countries but would integrate them to achieve a seamless flow of information and documentation,” Mr Ngwenya said during the sensitisation at the Mombasa Beach Hotel.

Truckers buy the fleet management system at Sh24,000 and pay an average of Sh2,000 management fee per month.“We are not interested in making money with the system and the initial cost of the gadget will be less than Sh12,000 and a monthly management fee of about $3 (Sh255),” explained Mr Ngwenya.

The sensitisation in Comesa member states aims at getting volunteers for a free pilot project that will run for three months starting next month. Source: Business Daily Africa.com