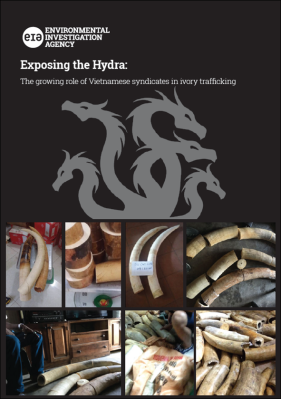 Despite being the focus of numerous investigations and exposés regarding the country’s role in the international illegal wildlife trade, Vietnam continues to be a primary hub for ivory trafficking.

The Environmental Investigation Agency (EIA) has released a report Exposing the Hydra: The growing role of Vietnamese syndicates in ivory trafficking documenting the findings of a two-year undercover investigation. (Download the full report at this hyperlink).

Investigators successfully infiltrated several ivory trafficking syndicates operating in Mozambique, South Africa, Malaysia, Laos, Cambodia and Vietnam, building a detailed picture of how these criminal organizations are structured, how they cooperate with one another and how they also traffic other endangered species such as rhinos and pangolins.

In contrast to China, which closed its domestic legal ivory market in January and stepped up enforcement against ivory trafficking, the Government of Vietnam has not demonstrated serious commitment to tackling wildlife crime, says the organization. Instead, the past decade has seen Vietnam serve as a prominent transit route for large ivory shipments to China as well as overseeing a growing carving industry and one of the world’s biggest markets for ivory sales.

The report states that since 2009, 56 tons of ivory have been seized in Vietnam and a further 20 tons linked to Vietnam seized in other countries. This is equivalent to ivory sourced from approximately 11,414 elephants.

EIA estimates that since 2015 the ivory traffickers identified during the course of their investigation have been linked to seizures totalling 6.3 tons of ivory and 299 kilograms of rhino horn, including the recent record seizure of 50 rhino horns in Malaysia in August 2018. Between January 2016 and November 2017 there were at least 22 successful shipments of ivory from Africa, with an estimated weight of 19 tons and potential revenue of $14 million.