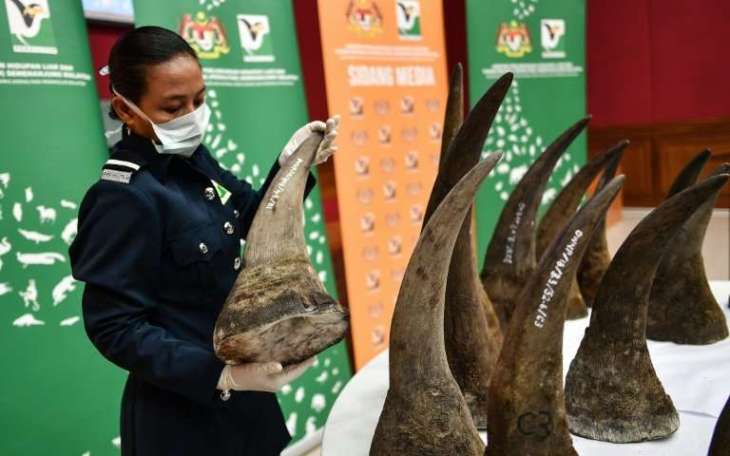 Malaysia has made a record seizure of 50 rhino horns worth an estimated $12 million at Kuala Lumpur airport as they were being flown to Vietnam, authorities said Monday.

The 50 rhino horns weighed 116 kilogrammes (256 pounds) and are worth about 50 million ringgit ($12 million), he told AFP, adding that the seizure was “the biggest ever in (Malaysia’s) history in terms of the number of horns and value”.

Vietnam is a hot market for rhino horn, which is believed to have medicinal properties and is in high demand among the communist nation’s growing middle class.

Trade in rhino horn was banned globally in 1977 by the Convention on International Trade in Endangered Species of Wild Fauna and Flora (CITES), but illegal hunters have decimated rhino populations to sate rampant demand in East Asia.

A single kilo of rhino horn can fetch tens of thousands of dollars in the region, where many falsely believe it can cure cancer.

All rhino species are under threat of extinction, according to the International Union for Conservation of Nature (IUCN).

Abdul Kadir said authorities were unable to identify the origin of the animal parts. Rhino horn sent to Asia typically comes from Africa.

Officials also found a huge stash of animal bones—believed to be from tigers and leopards—in the same shipment, with an estimated value of 500,000 ringgit.

Authorities have not made any arrests over the seizures.

Elizabeth John, from wildlife trade watchdog Traffic, described the rhino horn seizure as “staggering” and urged authorities to track down the people behind the smuggling attempt.

Kuala Lumpur is a hub for cheap flights around Southeast Asia, and has become a key transit point in the smuggling of rare animal parts.