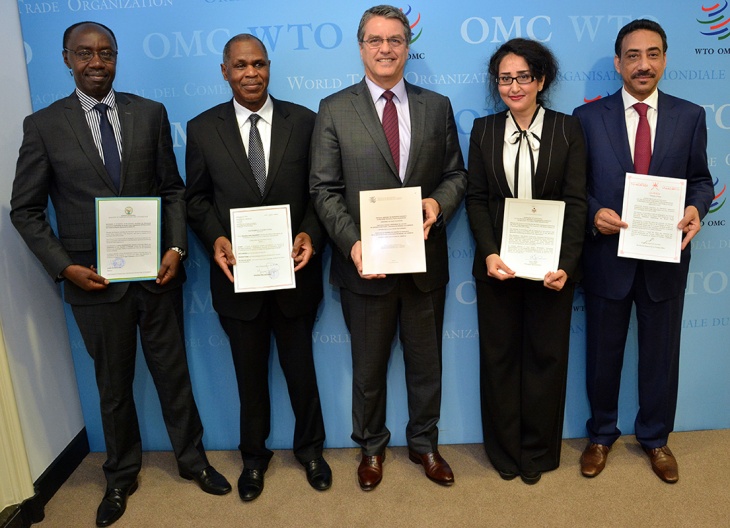 A major milestone for the global trading system was reached on 22 February 2017 when the first multilateral deal concluded in the 21 year history of the World Trade Organization entered into force. In receiving four more ratifications for the Trade Facilitation Agreement (TFA), the WTO has obtained the two-thirds acceptance of the agreement from its 164 members needed to bring the TFA into force.

Rwanda, Oman, Chad and Jordan (pictured above) submitted their instruments of acceptance to WTO Director-General Roberto Azevêdo, bringing the total number of ratifications over the required threshold of 110. The entry into force of this agreement, which seeks to expedite the movement, release and clearance of goods across borders, launches a new phase for trade facilitation reforms all over the world and creates a significant boost for commerce and the multilateral trading system as a whole.

Full implementation of the TFA is forecast to slash members’ trade costs by an average of 14.3 per cent, with developing countries having the most to gain, according to a 2015 study carried out by WTO economists. The TFA is also likely to reduce the time needed to import goods by over a day and a half and to export goods by almost two days, representing a reduction of 47 per cent and 91 per cent respectively over the current average.

Implementing the TFA is also expected to help new firms export for the first time. Moreover, once the TFA is fully implemented, developing countries are predicted to increase the number of new products exported by as much as 20 per cent, with least developed countries (LDCs) likely to see an increase of up to 35 per cent, according to the WTO study.

At present, 10 out of 24 Members of East and Southern Africa (ESA) have ratified the TFA. These are; Mauritius, Botswana, Lesotho, Kenya, Zambia, Seychelles, Madagascar, Swaziland, Mozambique and Rwanda. So where to now South Africa?