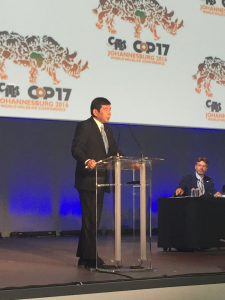 At the invitation of the South African Minister of Environmental Affairs, Secretary General Kunio Mikuriya addressed a “Ministerial Lekgotla” held in Johannesburg, South Africa, on 23 September 2016 as an introduction to the CITES CoP 17 World Wildlife Conference.

During the high-level panel session, Secretary General Mikuriya focused on the role of Customs in facilitating legal trade and intercepting illegal trade in wildlife and on its link to CITES and Sustainable Development Goals.

He highlighted the WCO Declaration on the Illegal Wildlife Trade, which had been adopted in 2014 and aimed at drawing the attention of policy makers to environmental crime and at raising the priority of Customs operations in this area.

He also referred to the INAMA project (started in 2014) for technical and capacity building assistance for Customs on risk management, collaboration with other law enforcement agencies and institution building to enhance integrity.  Cooperation with the transport industry was also part of the WCO efforts to improve compliance, as exemplified in the Royal Foundation Task Force Declaration on Transport, adopted earlier this year.

The presence in Johannesburg of high-level delegations also provided an opportunity for the Executive Heads of the International Consortium on Combating Wildlife Crime (ICCWC) to meet in order to further enhance the collaborative work with the CITES Secretariat, INTERPOL, the UNODC, the World Bank and the WCO.