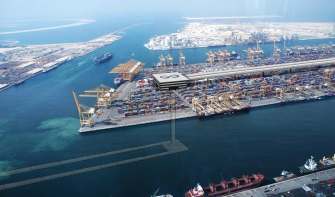 Hyperloop could be heading to the Middle East, thanks to a new deal signed on Monday between Hyperloop One and port operator DP World. The partnership calls for a feasibility study of how the nascent, ultra-fast transport technology could improve Dubai’s Jebel Ali Port, but both parties hope that’s just the beginning.

The study will look at the possibility of building a Hyperloop to take freight off container ships arriving at Jebel Ali and transport it via the technology’s system of pods moving through pressurized tubes to an inland depot that DP World plans to build further inland.

“By having a system where a box can be taken off a ship and dropped into the tube or pod, we are moving activity that would otherwise be on the island terminal as well as reducing the size of the terminal you need to build,” said Hyperloop One founding board member Peter Diamandis.

The Los Angeles-based startup says a Hyperloop can fit within Dubai’s existing transportation corridors and could reduce freeway traffic by taking cargo transport trucks off roads. DP World says it can even foresee using a “submerged floating Hyperloop” located next to its huge new terminal built on a man-made island. Source: Hyperloop One