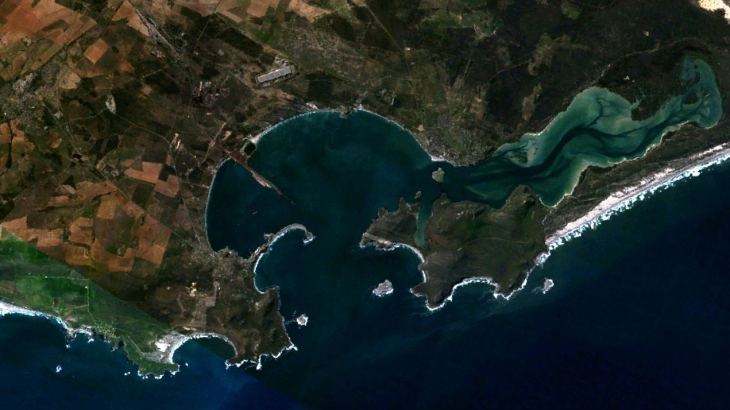 Recently while reading of Transnet’s terminal capex expansion plans, I came across this interesting if not highly improbable plan featured in an article by Harry Valentine on Maritime Executive. I say improbable given the current economic and labour situation prevailing in South Africa at this time, not to mention the fact that the Transnet controlled Port of Ngqura is considered South Africa’s transhipment hub. Nonetheless, I think its admirable that such ideas are conceived and with a bit of thought and application are presented for consideration. From a Customs’ perspective such plans – in particular the notion of a floating terminal – could pose some interesting challenges (err opportunities) for SARS particularly given impending new compliance, licensing and reporting requirements contained in the new Customs Control Act.

The Port of Los Angeles has welcomed its first 18,000-TEU ultra-large container ship, and Brazil, with a population almost as large as the U.S. and with future prospects of increased trade with Asia, could see such ships arriving via South Africa.

The projected future volume of container traffic that will pass through Brazilian ports would warrant future operation of ultra-large container ships between Brazil and major Asian transshipment terminals. However, it would take much investment and likely many years before a Brazilian port and terminal would be able to berth and service these vessels. One option would be to develop a transshipment port in South Africa that could serve as a terminal for ultra-large container ships that sail from such ports as Busan, Inchon, Shanghai and Hong Kong carrying containers destined for South America.

South Africa offers two bays capable of accepting ultra-large container ships. Richards Bay in the Northeast offers a draft clearance of 19 meters, while Saldanha Bay just north of Cape Town offers a draft of 21 meters. Bulk and ore freight terminals operate at both locations. Saldanha Bay is larger than Richard’s Bay, located near the large City of Cape Town and is closer to the shipping lane between South America and the Far East. It is also close to St. Helena Bay where waiting vessels may drop anchor.

When Richards Bay is at capacity, alternative areas where waiting vessels may drop anchor with a measure of protection from stormy seas are located at much greater distances. The Port of Durban is still Africa’s busiest container port and regularly operates at near-capacity. However, Durban and companion ports at Maputo, Port Elizabeth, Coega, East London and Cape Town have insufficient depth to accommodate ultra-large container ships. Saldanha Bay is a natural inlet that offers the necessary depth and has available space to develop a transshipment terminal to the south of the ore terminal.

There are tentative plans to borrow a precedent from Egypt and anchor a floating LNG storage tanker in Saldanha Bay, perhaps near the southern end of the inlet, to serve a variety of customer requirements. Tanker vessels could regularly carry LNG from Mozambique, Tanzania and Angola to the floating storage terminal. Operational precedents established at the Port of Durban could ensure smooth operation of maritime vessels entering and leaving Saldanha Bay, especially with excess vessels being able to drop anchor in St. Helena Bay as well as nearby Table Bay at Cape Town some 60 nautical miles away.

Future ultra-large container ships of 22,000 TEUs would offer savings in terms of average cost per container on the segment between Saldanha Bay and distant East Asian ports at or near the South China Sea. Automated terminal operations that include transfer of containers among vessels could contribute to competitive transportation costs to a variety of destinations along South America’s Atlantic coast as well as several South African ports, perhaps extending as far north as Nigeria on the Atlantic Coast (Asia – Africa trade), Tanzania on the East Coast (Africa – South America trade), as well as domestic Africa -Africa trade.

While South Africa’s economy may presently be under-performing, South African authorities have the option of inviting foreign investors and developers to explore the option of developing a transshipment super port at Saldanha Bay. Future trade through Saldanha Bay would include containers sailing to and from East Asian transshipment terminals such as Port of Colombo and Port of Singapore to connect into the combination of West Coast Africa – Asia and Atlantic Coast South America -Asia trade. Such combined trade enhances prospects for potentially viable transshipment port and terminal operations at a South African bay.

A transshipment super port at the southern end of the African continent would mostly transfer containers that originate from and be destined for foreign ports. Only a minority of the containers would originate from or be destined for domestic South African ports. South African exporters and importers would benefit from lower transportation costs per container compared to the transportation costs per container aboard smaller vessels.

It’s an idea worth considering.

Cape Town is at the crossroads of ships that carry the trade between Asian nations and nations along the Atlantic Coast of South America and sub-Sahara West Africa. There may be future scope for an offshore, floating transshipment terminal built at Saldanha Bay and assembled either at Cape Town or St Helena Bay to reduce per-container transportation costs along this trade route. Such a terminal would attract interest from overseas. A floating hotel partially surrounded by breakwaters and permanently anchored offshore near a coastal city could be connected to the mainland using floating bridges and water taxi service. 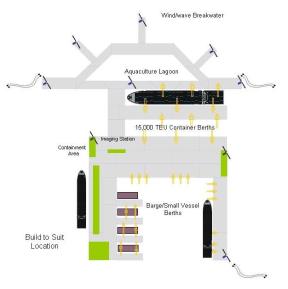 There may be scope to expand upon the technology to develop multiple floating structures in a calm water area, with bridges connecting between them at strategic locations to maintain navigable canals between them. While water taxis could shuttle visitors between mainland and an offshore floating island, semi-floating bridges could also connect between mainland and such islands that may include business districts and even residential areas.

Coupled floating structures may also serve as an airport with a runway for commuter size of aircraft and perhaps even comparable size of wing-in-ground effect vehicles that provide service between coastal cities.