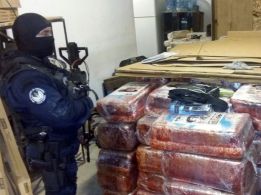 Authorities on both sides of the US-Mexico border have shut the 10th drug-smuggling tunnel to San Diego in more than a decade, a passageway Mexican authorities on Thursday attributed to the cartel of fugitive kingpin Joaquin “El Chapo” Guzman.

A sophisticated, super tunnel was discovered by federal officials Wednesday night near San Diego, leading to the arrest of 22 people and confiscation of 12 tons of marijuana estimated at $6 million.

The tunnel, originating from the Mexican border city of Tijuana, is about eight football fields in length, with the last quarter-mile crossing US territory before ending beneath a carpet warehouse in the busy Otay Mesa industrial district of San Diego, US and Mexican officials said.

The tunnel was uncovered through intelligence gathered by US federal agents who infiltrated a Mexican drug-smuggling ring during the past six months, according to Laura Duffy, the US Attorney in San Diego.

It marked the 10th subterranean passageway from Mexico to Otay Mesa discovered since 2002. Like those and dozens of others found along the nearly 3 200km border in the last decade, the latest tunnel was equipped with lighting, ventilation and a rail system for moving goods, authorities said.

Duffy said US officials were less certain that Sinaloa was behind the new tunnel, based on the comparatively unfinished, dangerous nature of the tunnel shaft on the US side.

“We usually see ladders going down and staircases,” she said.

“This particular tunnel drops 32 to 35 feet straight down.”

Duffy said US federal agents moved to seize control of the tunnel on its north end on Wednesday after a shipment of 2 tons of marijuana arrived there, and six men were arrested, two of whom were to be arraigned on federal drug-smuggling charges on Thursday.

Mexican agents seized 10 tons of marijuana awaiting shipment through the passage at the Tijuana side, and authorities expect to find more contraband when a thorough search of the tunnel is made, Duffy said.

Guzman, the world’s most wanted drug trafficker, escaped in July from a Mexican maximum-security prison through a mile-long tunnel that surfaced right inside his cell.

His escape sparked a massive manhunt, and Mexico’s government said on Friday that Guzman had suffered injuries to his face and leg after recently beating a hasty retreat from security forces. Source: IOL