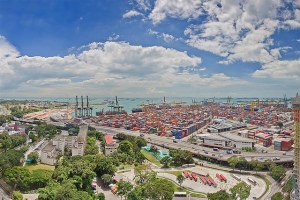 The Port of Singapore has been named the best seaport in Asia for the 27th time – beating fierce rivals Hong Kong and Shanghai.

The honour was given out at the 2015 Asia Freight, Logistics and Supply Chain Awards (AFLAS) held in Hong Kong here the other day.

Determined by votes cast by readers of Asia Cargo News, the Port of Singapore clinched the award for its leading performance on a range of criteria, including cost competitiveness, container shipping-friendly fee regime, provision of suitable container shipping-related infrastructure, timely and adequate investment in new infrastructure to meet future demand and the facilitation of ancillary services.

The other finalists in the Asia category this year were the Port of Hong Kong and Port of Shanghai.

Said Mr Andrew Tan, chief executive of Maritime and Port Authority of Singapore (MPA): “We will continue to work closely with all our stakeholders to strengthen our competitiveness as a premier global hub port and international maritime centre.

“Singapore will also continue to plan and invest ahead, such as our commissioning of Pasir Panjang Terminal Phases 3 and 4 this week which will increase the overall capacity of Singapore’s port to 50 million TEUs (Twenty-Foot Equivalent Units) when fully operational.”

Prime Minister Lee Hsien Loong on Tuesday officially opened the terminals. When the expansion is fully operational by the end of 2017, Singapore will be able to handle a total of 50 million TEUs of containers annually.

Its total volume of bunkers remained the highest in the world, at 42.4 million tonnes. The total tonnage of ships under the Singapore Registry of Ships was 82.2 million GT, putting Singapore among the top 10 ship registries in the world.