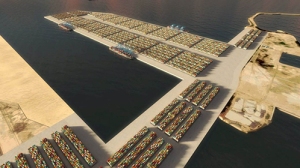 he Maritime and Port Authority of Singapore (MPA) has signed a milestone contract for the construction of the first phase of a new $1.82 billion mega port in Singapore.

The contract was awarded to a joint venture between the Dredging International Asia Pacific Ltd., a subsidiary of Belgium’s DEME Group, and South Korea’s Daelim.

The project, formally known as the Tuas Terminal Phase 1 Reclamation, Wharf Construction and Dredging Project, entails the construction of a new port terminal with 20 deep-water berths having a total capacity of 20 million twenty-foot equivalent units (TEUs) per annum. The Joint Venture will be responsible for the construction of an 8.6-kilometer quay wall and its foundation, the dredging of the fairway and basins, as well as the reclamation of 294 hectares of new land.

This major project is expected to complete within six years, and has been awarded to the Joint Venture for a Contract value of SGD 2.42 billion (or approximately US $1.82 billion).

Beginning in 2030, the Government of Singapore will start to consolidate its container port facilities at Tuas. New technology will be introduced at the greenfield site to create a hypermodern, innovative and largely automated logistics hub. The consolidation will also free up existing port land near the city centre for future urban redevelopment.

The Tuas Terminal Project is anticipated to ensure that Singapore’s leading global hub port continues to have sufficient capacity in the long term to meet industry demand.

Singapore ranks as the world’s second busiest container port handling 33.9 million 20-foot containers in 2014, according to the MPA. The Port of Shanghai ranks as number 1 with 35.2 million TEU in 2014. Source: Gcaptain.com