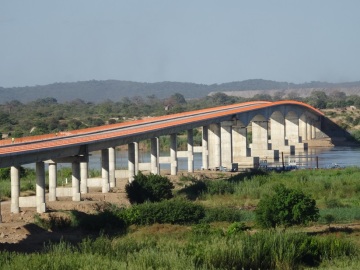 The second bridge over the Zambezi River in Tete, which is 715 metres long and was built by a consortium of Portuguese companies, was inaugurated Wednesday, after construction began in 2011. The bridge, which connects the city of Tete to the Moatize district, which has the largest deposits of coal in Mozambique, was completed last October.

The bridge as a whole is composed by the bridge itself which crosses the Zambezi riverbed, and an access viaduct to access the bridge from the south side.

The work, costing 105 million euros, was executed by a Portuguese consortium of contractors made up of Mota-Engil, Soares da Costa and Opway and, as well as the bridge, overpass and access roads, included rebuilding 260 kilometres of roads linking Tete to the borders with Malawi and Zimbabwe.

As part of the “New Tete Bridge and Roads” concession the project was designed for movement of heavy vehicles that currently cross the Samora Machel bridge, relieving pressure on the bridge, also on the Zambezi River, which was built over 50 years ago.

The new bridge is named Kassuende in honour of a place in the district of Marávia that between 1968 and 1974 was a logistics base in Mozambique’s armed liberation struggle. Source: Macauhub & Betar.pt