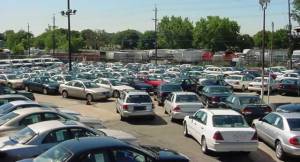 There is a drastic increase in motor vehicle imports through Beitbridge border post as dealers are rushing to buy cars before the proposed 20 percent customs duty increase on imported motor vehicles comes into effect on November 1.

Finance and Economic Development Minister Patrick Chinamasa announced recently the Government intendeds to increase duty of motor vehicles which he said contributed 10 percent of the import bill in the first half of this year.

Customs duty for vehicles with engines above 1500cc has not been changed from 86 percent inclusive of VAT and Surtax. The development has raised anxiety among most Zimbabweans who are now rushing to buy second hand cars from Japan some of which come through South Africa.

Zimbabwe Revenue Authority (Zimra) is processing an average of 170 car imports at the border post per day since the beginning of October. Prior to the announcement Zimra used to process between 60 and 70 car imports per day. ZIMRA officers at the border said in separate interview yesterday that they were battling to clear the vehicles at Manica Transit Shed where 300 new cars arrive per day.

“We used to get 100 to 150 cars per day , but now the number has doubled and is ever increasing,” said one of the officers.

“We used to sell around 20 cars per day but now the number has increased to 40 and we have a backlog in deliveries to Zimbabwe.

“We are now hiring other car carriers to take the vehicles across the border,” he said.

Mr Mabidi said even the small car dealers who used to sell between 5 and 10 cars per day were now selling up to 20 vehicles. Some dealers have also reduced prices while others are increasing the prices because of the demand. A modest vehicle costs between $2500 and $3000 at these dealerships. Source: The Herald