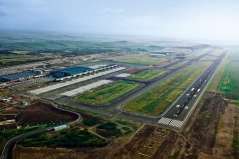 Dube Tradeport will be officially launched as an Industrial Development Zone (IDZ) by President Zuma on Tuesday 7 October.

At the launch event, the Dube Tradeport will officially be handed over an operator permit which provides them the status of an IDZ.

Situated at the Dube Centre, King Shaka International Airport, Durban, it was designated as an IDZ on 1 July 2014 by the Minister of Trade and Industry, Dr Rob Davies.

Davies says, “The Dube Tradeport IDZ will be launched during a period of transition wherein Industrial Development Zones as governed by the Manufacturing Development Act will become Special Economic Zones (SEZ) under the new Special Economic Zones Act 16 of 2014.”
According to Davies, the Act has been assented to by the President, and will come into effect before the end of 2014.

Davies adds, “The main areas that have designated as Dube Tradeport Industrial Development Zone (DTPIDZ) are Dube Agrizone and Dube Tradeport. Dube Agrizone is about 63.5 hectares and focuses on high-value, niche agricultural and horticultural products while Dube Tradezone which is 240.27 hectares focuses on manufacturing and value-addition primarily for automotive, electronic, fashion garments and similar high value, time-sensitive products and inputs.”

“The launch of the IDZ will highlight the continuous efforts by government to promote industrialisation and create awareness about the SEZ programme, and its potential to grow the economy and create jobs through creating a conducive environment for foreign direct investment.” Source: Transportworldafrica.co.za with images from dubetradeport.co.za.