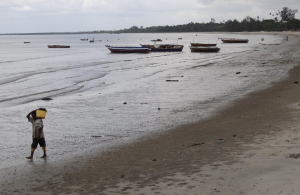 The government of Tanzania has announced that successful negotiation with Chinese officials will allow work to start on the $11bn Bagamoyo megaport this year, rather than January 2015, as originally scheduled.

The port is to be developed by China Merchants Holdings International, the world largest independent port operators. In the first phase of work, the quay, the container yards, the cargo terminals and all dredging work will be completed by 2017.

These facilities will then be expanded in stages over a period of 30 years, to give an eventual capacity of 20 million containers a year. This is likely to make the port the largest on the east coast of Africa, with a capability to handle roll on, roll off ships and container vessels with a 10,000 TEU capacity (these is, “new Panamax” ships that are too large to fit in the Panama Canal).

Underwriting the development is the discovery of some 200 trillion cubic feet of natural gas, which is going to make the country a leading exporter over the next decade.

Bagamoyo is seen as a Tanzania’s trump card in the sharpening struggle with other east African companies for foreign investment, export markets, industrial development and business from landlocked countries in the interior.

In particular, Tanzania is competing with the Kenyan port of Mombasa for investment and the handling of exports from Uganda, Burundi, Zambia and Rwanda. Although it looks to be in the lead in terms of port infrastructure, Kenya has taken the lead in the development of effective rail links, and Mozambique is closer to bringing its liquid natural gas deposits to market.

When completed, the port will cover about 800 hectares. Around it will be a 1,700 hectare special economic zone. The intention is to encourage set up industries that process or refine Tanzania’s raw materials, such as coffee roasting or ore processing, thereby capturing more of the value chain.

Adelhelm Meru, the director general of the Export Processing Zones Authority, which will be in charge of the zone, told journalists in Dar es Salaam recently that he wanted to attract “industries specialising in value-addition of agricultural products” which he said had been a leading area of investment under the EPZA for the past six years. He said about 55% of industries established under the EPZA dealt in agricultural and textile processing.

The zone is expected to be fully developed by 2024. Source: Global Contruction Review