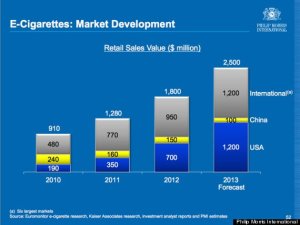 It seems the ‘e-industry’ is the vehicle for the next generation of contraband and illicit goods and Im not alluding to the electronics and entertainment industry here. While the World Health Organisation urges a ban on marketing of e-cigarettes, will the need for governments to consider taxes on such become necessary …read on:

E-cigarettes are following in the footsteps of their none-lectronic predecessors by utilizing advertising means no longer available to traditional cigarettes and increasing their ad spending on techniques such as television commercials, promotions, events, sample giveaways, celebrity endorsers, and slogans such as “A perfect puff every time.”

Electronic cigarettes are battery-powered devices that heat a nicotine solution into a vapor inhaled by users. While the chemicals of tobacco cigarettes are not included, the addictive feature of nicotine remains. The use of e-cigarettes has climbed steadily, with 6 percent of all adult Americans and 21 percent of adult smokers trying them in 2011, nearly twice the rates in 2010, according to the Centers for Disease Control and Prevention.

Unlike tobacco cigarettes, which are heavily regulated, e-cigarettes are free from laws that limit their methods of marketing. As a result, brands such as Blu eCigs have spent $12.4 million on advertising for the first quarter of 2013, up from less than $1 million last year. They feature endorsements from actor Stephen Dorff and personality Jenny McCarthy. Traditional cigarette companies such as Lorillard and Reynolds are also getting in on the action by purchasing or launching their own lines of e-cigarettes.

The advertising itself even references tobacco cigarettes, with campaigns that seek to make smoking acceptable again. In a Blu eCigs ad, for example, Dorff praises e-cigarettes because they can be smoked “at a basketball game . . . in a bar with your friends . . . virtually anywhere,” adding, “Come on, guys, rise from the ashes.”

But with the increased profile may come regulation.

“It is beyond troubling that e-cigarettes are using the exact same marketing tactics we saw the tobacco industry use in the ’50s, ’60s and ’70s, which made it so effective for tobacco products to reach youth,” Matthew L. Myers, president of the Campaign for Tobacco-Free Kids, told The New York Times. “The real threat is whether, with this marketing, e-cigarette makers will undo 40 years of efforts to deglamorize smoking.”

WHO urges countries to adopt global guidelines that will end the indoor use of e-cigs. WHO also calls for a ban on marketing practices that could encourage children and non-smokers to use e-cigs.

States such as Indiana, New Jersey, North Dakota, Mississippi, and Utah have already extended restrictions on tobacco cigarettes to include e-cigarettes, while other states such as California and Pennsylvania are considering similar laws. Inhalation of e-cigarettes is prohibited on Amtrak trains and onboard U.S. planes.

The Food and Drug Administration is said to be planning the release of proposed regulations in October. Referencing a report from the financial group CLSA Americas, AdAge reported that the agency is expected to propose a ban on TV advertising to set limits on sales to minors, implement the possibility of a warning label, and restrict online sales. An FDA spokesperson said she could not comment on specifics of a proposed rule, but that the agency “intends to propose a regulation that would extend the agency’s ‘tobacco product’ authorities – which currently only apply to cigarettes, cigarette tobacco, roll-your-own tobacco, and smokeless tobacco – to other categories of tobacco products that meet the statutory definition of ‘tobacco product.’ Further research is needed to assess the potential public health benefits and risks of electronic cigarettes and other novel tobacco products.”

Why it matters: The increasing use and potential regulation of e-cigarettes may trigger another round of tobacco wars between industry and the government. Debate about the product remains – is it an alternative form of smoking, or a means of quitting, like nicotine gum? Should e-cigarettes be taxed and regulated like traditional tobacco products, with age limits, warning labels, and a ban on certain forms of advertising such as TV, or are they a separate and distinct category of products? If and when the FDA wades into the issue, the fight will truly begin. Source: Manatt Phelps & Phillips LLP