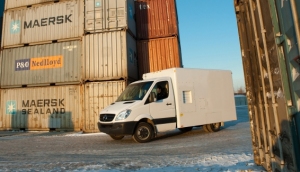 American Science and Engineering, Inc. (“AS&E”), has announced the receipt of an order for two ZBV® mobile screening systems from a new international customer, the Kingdom of Lesotho. The ZBV systems will screen vehicles and cargo for threats and trade fraud on its border with South Africa to facilitate trade and counter smuggling.

The Lesotho Revenue Authority (LRA) has launched a Customs Modernization Program aimed at simplifying border procedures while speeding up the inspection process. The ZBV systems, with its safe and effective technology, ease-of-use, and high-throughput capability will greatly support this initiative.

“We are delighted to have the opportunity to support the LRA in its Customs Modernization Program and to help secure the Kingdom of Lesotho,” said Chuck Dougherty, AS&E’s president and CEO. “The ZBV system has been proven effective for anti-smuggling programs, with one customer recently reporting a 54% increase in tobacco seizuresi in a four month period. With the ZBV system’s outstanding field reports, we continue to add new countries to our installed base in key geographic markets and expand our market penetration of Z Backscatter® technology in Africa.”

LRA spokesperson Mr. Pheello Mphana says, “The LRA is pleased to acquire this advanced technology to support our modernization process. Following our detailed examination of non-intrusive inspection systems, the ZBV provides the optimum solution to deploy on our borders to facilitate trade by reducing inspection delays and the cost of compliance, improve border control and detect illicit cross-border movement.”