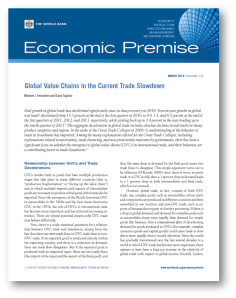 Real growth in global trade has decelerated significantly since its sharp recovery in 2010. Year-on-year growth in global real trade decelerated from 13.3 percent at the end of the first quarter of 2010, to 9.9, 3.1, and 0.5 percent at the end of the first quarters of 2011, 2012, and 2013, respectively, while picking back up to 3.9 percent in the year leading up to the fourth quarter of 2013. This aggregate deceleration in global trade includes absolute declines in real trade for many product categories and regions. In the wake of the Great Trade Collapse of 2008–9, understanding of the behavior of trade in slowdowns has improved. Among the many explanations offered for the Great Trade Collapse, including explanations related to uncertainty, trade financing, and new protectionist measures by governments, there has been a significant focus on whether the emergence of global value chains (GVCs) in international trade, and their behavior, are a contributing factor in trade slowdowns.