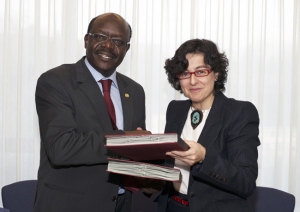 The United Nations Conference on Trade and Development (UNCTAD) and the International Trade Centre (ITC) have joined forces to assist developing countries in the implementation of the recent WTO Trade Facilitation Agreement reached in Bali, Indonesia. The two agencies signed a Memorandum of Understanding 4 March reaffirming this collaboration.

“The Trade Facilitation Agreement is a real opportunity for developing countries, but only if they can put its provisions into practice,” said Arancha González, ITC’s Executive Director.

“The two agencies complement each other very well and can offer meaningful support to developing countries together,” said UNCTAD Secretary-General Mukhisa Kituyi. UNCTAD already has a successful programme in building institutional capacity around effective trade facilitation, while ITC has experience in building the capacity of the private sector and increasing their export competitiveness”, he added.

The programme which the agencies will develop will focus particularly on Least Developed Countries.

Initially, the cooperation will concentrate on helping countries to identify and categorise the commitments under the Agreement in categories A, B and C and ensuring support for implementing the transparency provisions of the Agreement. These include ensuring better and easier access to information for traders; helping to develop advance rulings and rights of appeal legislation; facilitating greater predictability and reliability of procedures through simplified formalities and documentation and the use of international standards; and the adoption of single windows for traders.

“These are just some of the areas where the ITC and UNCTAD have identified clear needs in developing countries based on UNCTAD”s needs assessment programmes and the surveys undertaken by the ITC of its SME clients,” Mr. Kituyi said.

“In some cases we will need to ensure better cooperation between the public and private sector,” Ms. González said. “This is the ITC”s bread and butter: supporting a trade dialogue between business and policy makers.”

The collaboration between the two agencies is in response to a critical issue identified by developing countries in the lead-up to December’s WTO conference: whether there was enough financing and to support the necessary reforms, particularly in LDCs. This partnership will provide an opportunity to donors and other development partners to demonstrate their commitment to the implementation of global trade facilitation reform by working with UNCTAD and ITC. The agencies will collaborate with other organisations and the private sector to advance implementation of the WTO Trade Facilitation Agreement.

“The hope is that donors will see this collaborative venture between the ITC and UNCTAD, as an effective and efficient platform for helping developing countries, especially LDCs, to take advantage of the benefits an effective facilitating architecture can bring,” Mr. Kituyi said.

The private sector is also urged to explore ways that they can partner with the ITC and UNCTAD to provide their expertise to SMEs in developing countries. “Making the process of trade easier in developing countries is a plus for the global trade reality,” concluded Ms. Gonzalez, “It is a win-win situation”. Source: UNCTAD