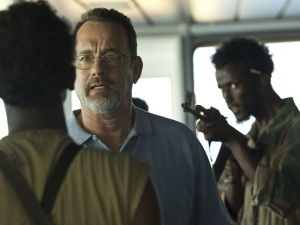 The blockbuster film “Captain Phillips” has lived up to the hype, receiving a total of 6 Oscar Nominations including Best Picture and Best Supporting Actor for the first-time Somali actor who played the pirate leader, Muse.

“Captain Phillips”, directed by Paul Greengrass and starring Tom Hanks, was released in October and tells the story of the 2009 Maersk Alabama hijacking in the Indian Ocean and subsequent kidnapping of the captain, Capt. Richard Phillips.

Perhaps the biggest talk of today is the nomination of Barkhad Abdi in the Best Support Actor category for his role as Muse, the leader of a band of Somali pirates who seized the MV Maersk Alabama. Born in Somalia and raised in Yemen, Abdi moved to the U.S. as a teenager and was living and working as a limo driver in Minnesota when he was cast for the role, his first acting job ever.

Tom Hanks, on the other, did not receive any nominations for his role as Captain Richard Phillips.

While the film has been the focus of some controversy over the Captain’s decision to sail close to the Somali coast, overall it has taken center stage in promoting a strong U.S. Merchant marine, not to mention hailed by critics.

“The courage shown by Captain Phillips and his crew during their ordeal is a shining example of the brave American mariners who receive the best training in the world,” said Tom Allegretti, Chairman of the American Maritime Partnership. “American mariners continually prepare for various operational challenges and are dedicated to the highest standards of safety and security. When it comes to the world-class training of America’s Merchant Marine, Captain Phillips and his crew are the rule rather than the exception.”