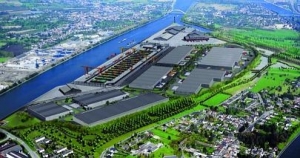 Liege Trilogiport is scheduled to open for business in the final half of 2015 (Picture: Liege Ports Authority)

Work is underway on a major multimodal logistics hub project in Belgium. Piloted by the inland port of Liège, it is designed to serve as an “extended gateway” to the seaports of Rotterdam, Antwerp and Zeebrugge.

The project will attract around €45 million of public funding from the Belgian authorities and the European Union to finance infrastructure requirements, while initial investment from the private sector is estimated at approximately €115 million.

Located on a 120 hectare site on the banks of the Canal Albert, the Trilogiport project is scheduled to be operational in the second half of 2015. It is expected to create more than 2,000 direct or indirect jobs.

Described as “a tri-modal (river, rail and road) logistics village,” it will comprise a 15ha container terminal, with 1,850 metres of quayside, operated by Luxembourg-based Euroports and its partner, DP World.

Provision is made too to build a rail freight terminal with 700 metres of track to connect Trilogiport with the national rail network. Construction of a road bridge is also planned to provide access to the motorway system around Liège.