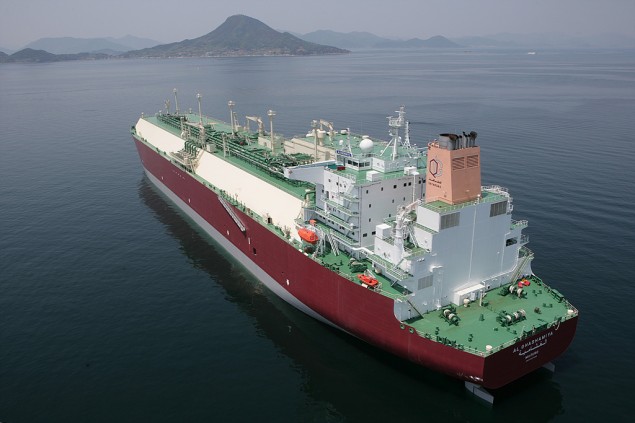 With soaring energy costs, Japan appears to have a pretty uniform goal, to invest as much as possible in other sources of energy and energy supply chains around the world. Many others like Qatar and Saudi Arabia are following suit and hedging themselves for what is turning out to be a reversal of their business model. Even the Louisiana Offshore Oil Port, which connects the world’s largest oil tankers with over half of the United States’ refining capacity is readjusting its business model for the changing flow of energy. With the eventual opening of the Liquefied Natural Gas (LNG) flood gates from the US however, coupled with Free Trade Agreements to places such as Japan, American energy firms and tax payers stand to cash in on the huge price gap that exists between the price of gas in the U.S. versus that which exists overseas.

At the moment, there’s a fairly good balance between supply and demand when it comes to the supply of ships and the demand for LNG product to be carried. Qatar, for example, uses 54 LNG carriers to transport their 77 million metric tons per year of LNG. Qatar also has a 70% stake in the Golden Pass LNG terminal in Texas. Additional exports from the US Gulf Coast will directly equal increased demand for more LNG carriers.

While regulators in the US trudge through the LNG export approval process, energy firms like Anadarko charge ahead with an ambitious LNG agenda offshore Mozambique in a field which was recently found to have at least 65 trillion cubic feet of recoverable reserves. Places like Mozambique, and offshore Israel, have the potential to really change the LNG marketplace given the sheer size of their fields and their proximity to the Asian and European markets respectively.

What does that mean for LNG shipping? A lot more ships. To handle 50 million mtpa, upwards of 35 LNG carriers may be needed for transportation if you compare the ratio between Qatar’s fleet size and their total LNG exports. Source: gcaptain.com