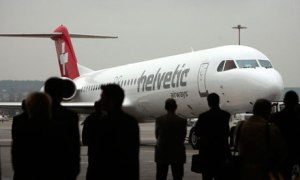 Eight masked gunmen forced their way through the security fence at Brussels‘ international airport, drove onto the tarmac and snatched some $50 million worth of diamonds from the hold of a Swiss-bound plane without firing a shot. The gang responsible for one of the biggest diamond heists in recent years used two black vehicles with a flashing blue police lights in their daring raid late Monday.

They tried to pass themselves off as police officers. The robbers, who wore outfits resembling dark police clothing, got away with 120 parcels, mostly containing diamonds but some also holding precious metals. Police said they found a burnt-out minivan believed to be involved in the robbery near the airport later Monday night.

The heist was estimated at some $50 million in diamonds. The robbers forced their way through a perimeter fence, at a place where two work sites obstructed a clear view. There were no details about how the hole was opened but airport authorities said it must have taken more than simply blasting through it with a vehicle.

The robbers drove up to the Swiss passenger plane some 20 minutes before departure time, brandishing their machine guns. Then they methodically broke into the hold, which was accessed from outside, to choose their loot. Passengers were unable to see the drama beneath them. The robbers finished their clinical operation with a high-speed departure through the same hole in the fence, completing the spectacular theft within barely five minutes. Source: Yahoo.com

Visit http://news.yahoo.com/video/robbers-fake-uniforms-pull-off-190916134.html for a video report of the incident.