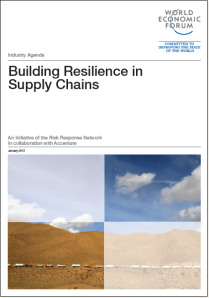 On 24 January 2013, the Secretary General of the WCO, Kunio Mikuriya, participated in a press conference dedicated to the launch of the World Economic Forum’s (WEF) Building Resilience in Supply Chains 2013 report. Sander van ‘t Noordende, Accenture’s Group Chief Executive for Management Consulting, introduced the report and its major findings, such as the top supply chain risks that include extreme weather, natural disasters, physical and cyber security threats, along with economic and political volatility. He highlighted that the report argued the need for a coherent and consistent framework to deal with supply chain resilience, partnerships between government, Customs and businesses, and the sharing information flows for risk assessment purposes.

Secretary General Mikuriya pointed out that supply chain resilience is very important for Customs, whose functions include ensuring that legitimate trade continues even in cases of disruption, an issue which has been addressed by a set of standards and instruments developed by the WCO, in particular, the 2011 WCO Resolution on the Role of Customs in Natural Disaster Relief.  He also stressed the importance of public-private partnerships in order to share security responsibility with trusted traders through the implementation of the WCO SAFE Framework of Standards to Secure and Facilitate Global Trade and its integral Authorized Economic Operator (AEO) programme.

The Secretary General of the IMO, Koji Sekimizu, addressed the concerns of the maritime sector, in particular, the sustainability of international transportation within the context of supply chain resilience. He mentioned that along with the WCO, the IMO has built its approach on risk assessment and risk management, resulting in the adoption of the International Ship and Port Facility Security Code (ISPS Code), a comprehensive set of measures to enhance the security of ships and port facilities. He also touched on the issues of port infrastructure, piracy and port security, and underlined the importance of cooperation with other stakeholders, such as the WCO and ICAO. Source: WCO