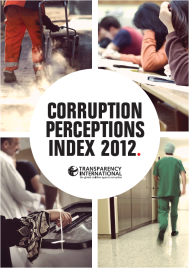 Twelve African countries are ranked among the 75 least corrupt nations in the world, according to the 2012 index published Wednesday by Transparency International. Published annually, the Corruption Perceptions Index draws upon a range of data sources to determine how corrupt countries’ public sectors are perceived to be. On a scale from 100 (highly clean) to 0 (highly corrupt), two-thirds of all countries scored below 50.

Botswana, Cape Verde, Mauritius, Rwanda, Namibia, Ghana and Lesotho led the SSA rankings, along with South Africa, which dropped two places this year – to nine from seven. Gambia, which was ninth last year, dropped this year to 21 in SSA and 105 globally. Tunisia, which is grouped with Middle East and North Africa (MENA) countries, is tied with Liberia at 75 on the global rankings. Crowding the bottom among the most corrupt in the world are Chad, Sudan and Somalia. For more information visit – www.cpi.transparency.org