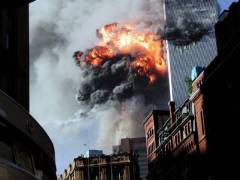 While American’s are accustomed to a period of mourning and remembrance over this time, it seems as though property mogul – Larry Silverstein – is more concerned with lost profits than the fate of a few thousand lost souls resulting from the 9/11 tragedy. Perhaps the US Airforce should be cited for not scrambling fighter jets quick enough to intercept the rogue planes. Moreover, why not cite the ‘negligent’ customs and immigration officials of the DHS for failing to intercept the rogue hijackers. A strange case of selective blame, indeed!

Most of the lawsuits arising from the hijacked plane attacks on the World Trade Center 11 years ago have been settled, but one demanding that United Airlines and American Airlines be held liable for loss of property and business could go to trial.

Two recent rulings by a federal judge in New York denying the airlines’ bid to dismiss the lawsuit over a narrow insurance dispute have opened the door to the entire case ending up in the hands of a jury. At issue is whether the two airlines and other defendants should pay additional damages to Larry Silverstein, the leaseholder of the World Trade Center property, beyond what he has already received from his own insurer.

The lawsuit claimed that negligence allowed hijackers to board two planes at the Boston airport and use them as missiles to destroy the 110-story twin towers and cause other buildings on the site in lower Manhattan to burn down. Before Sept. 11, the airlines and the security companies they hired oversaw security at airports and on planes. That responsibility now lies with the Transportation Security Administration, a government agency.

Silverstein is seeking $8.4 billion in damages for loss of property and lost business, even though U.S. District Judge Alvin Hellerstein has limited the amount to the $2.8 billion Silverstein paid for the leases. The lawsuit is among the last pieces of litigation resulting from the attacks of Sept. 11, 2001, which killed more than 3,000 people in New York, the Pentagon outside Washington, and Pennsylvania. Read the full article here! Source: Reuters.