I found the following book review on AllAboutShipping.co.uk and I’m sure the featured book will appeal to many of you associated with shipping, containers and trade in general. 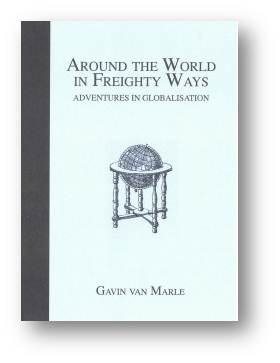 A unique first-hand account of the inner workings of globalisation from the heady days of manic growth in the noughties, Around the World in Freighty Ways is a personal travelogue with a difference. Covering over 50,000 miles with not a flight in sight, Gavin van Marle’s anthology puts into perspective the unsung heroes of world trade, the simple shipping container and the freight people who move them throughout the world.

The urge to travel is irresistible for those who have it in their genes. For Gavin and his equally restless wife Alex, what better way to slake their thirst to explore the wide horizons than to take a three-year honeymoon around the globe. If more justification for such a noble quest was required, they would report on the wondrous and rapid developments in freight transport that were occurring between 2002 and 2005.

The result is this compilation of articles, columns and thoughtful opinions entitled Around the World in Freighty Ways, which is published today by Right River Press Ltd., of London.

Both Gavin and Alex are professional journalists and have extensive experience in the freight industry. Their travels brought much insight into the varied and often ingenious ways the freight industry coped with, and indeed facilitated, the remarkable expansion of trade and economic growth between 2002 and 2005. As Gavin comments, “The humble container has done for globalisation what Alexander Graham Bell did for the internet – made it possible.”

The couple’s adventures however encompass not just freight experiences but also a variety of tales and a breadth of encounters that enable an astute, insightful and sometimes irreverent view on bureaucratic incompetence and political ineptitude. Many are laced with passionate descriptions of social inequality and gallant struggles for survival.

However, it is the similarity of basic human characteristics that shine through time and again as the episodes unfurl. As Gavin points out, it may in fact be the good fortune of people whose business it is to move freight around the world to recognise that, “Regardless of nationality, the vast majority of people share the same ambitions, hopes and fears, and that for most, joy and contentment comes simply from being nice to each other.”